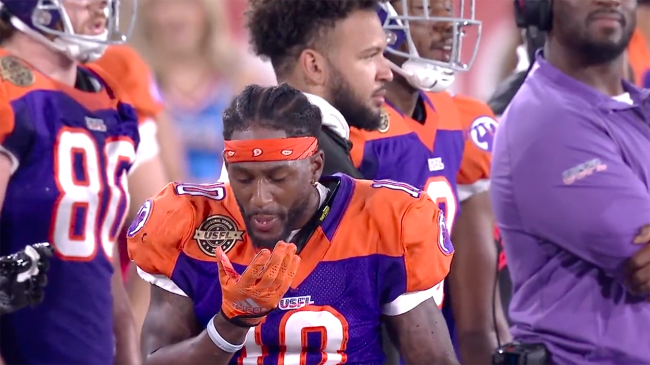 Pittsburgh Maulers wide receiver Isiah Hennie has that dog in him. The 25-year-old got hit so hard that he literally lost a tooth and stayed in the game.

On Sunday night, the Maulers fell one point short to the Philadelphia Stars, but not for lack of effort.

Right at the end of the third quarter, Hennie took a short pass down the left sideline before getting absolutely ROCKED by safety Cody Brown. The hit, which definitely came high, popped Hennie directly in the chinstrap before he went vertical and fell to the turf.

Live, full-speed replay of the hit is brutal. It was a slobberknocker.

However, the POV helmet cam video is really vicious. It gives a first-person perspective on what it’s like to be clobbered in the open field by a 200-pound safety coming downhill at full speed. It looks painful.

What a hit by Cody Brown 😤💥

Not longer after getting licked, Isiah Hennie made his way to the sideline, took off his helmet, and literally spit out his tooth.

He got hit so hard it knocked a tooth loose.

Fortunately, it was not one of Hennie’s front teeth. It wasn’t even one of his molars. He lost a wisdom tooth in the process of getting pulverized by Brown.

While some people might choose to take the rest of the day off, Hennie wasn’t phased. He was in great spirits and stayed in the game like a baller.

Listen in on a mic'd up Isiah Hennie after he lost a tooth on a big hit ⬇️ pic.twitter.com/d3CvlO2cub

Tre Walker, the Maulers quarterback who threw the pass to Hennie, said that he will take his receiver out to eat after finding out he lost his tooth.

Shoutout to Hennie. He took a lick and played it off