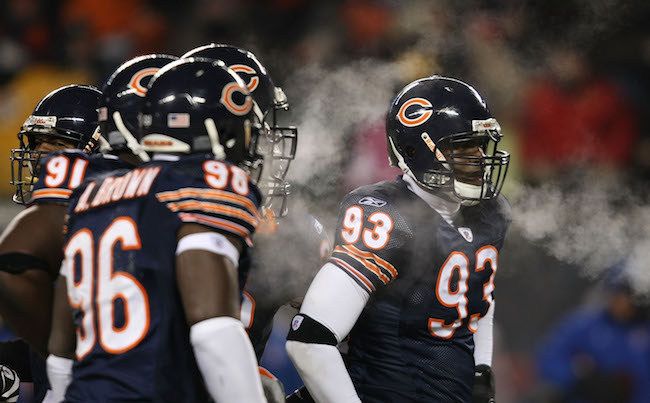 Martellus Bennett was one of the most outspoken players in the NFL over the course of his (recently-ended) career. For Bennett, basically every day was Festivus— he was never afraid to air his grievances, whether it was regarding teams who did him wrong, players he had issues with, or talking heads who make a living peddling scorching hot takes. Now that he’s out of the league, he’s more than happy to air some of its dirty laundry, which he did during a recent appearance on a podcast hosted by Chris Simms and Adam Lefkoe.

During the show, the topic of discussion turned to marijuana, with the hosts setting the over/under of NFL players who smoke weed at 70%. Bennett didn’t waste any time on his answer, stating a definitive “over” before estimating an oddly specific 89% of players are consumers of the Devil’s lettuce (and its various manifestations).

I guess the NFL executive who estimated 40% a few years ago was a little bit off.

How many players in the NFL smoke weed? Over/Under: 70%

Bennett went on to suggest most players use marijuana for medicinal purposes, saying that the substance abuse policy essentially encourages athletes to use substances that encourage abuse:

“There’s times of the year where your body just hurts so bad, that you don’t want to just be popping pills all the time. … It ruins your liver. There’s a lot of these anti-inflammatories that you take for so long that like, it starts to eat at your liver or kidneys and things like that. And a human made that. God made weed.”

The current relationship between the NFL and marijuana is about as good as that of a couple in a trailer park on an episode of Cops thanks in no small part to Roger Goodell’s impressive inability to fathom its potential benefits (which makes sense when you realize how well he’s done denying the result of studies concerning the downsides of the whole “CTE” thing).

Players have been lobbying the NFL to reconsider its stance on weed for years, with stars like Randy Moss and (obviously) Ricky Williams hoping the commissioner can figure out a way to pull out the tree branch that somehow found its way up his ass. Last summer, the league offered to team up with the NFLPA to look into potentially changing the policy, which I guess is a step in a right direction after sprinting the opposite way for a few decades.

Let’s all hope reason will prevail.