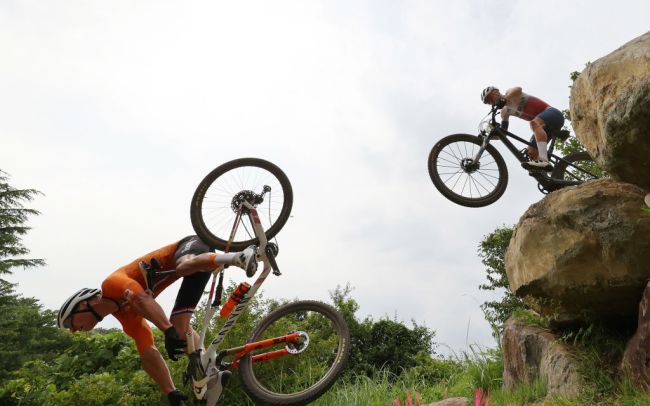 Less than a month ago, Dutch cyclist Mathieu van der Poel was leading the Tour de France. Now he’s crashed out of the Olympic Games.

The 26-year-old took the yellow jersey after Stage 2 of the Tour and wore it for nearly a week, but he relinquished the top spot after the first day in the Alps. The following morning, van der Poel announced that he was dropping out of cycling’s top race to prepare for Tokyo.

It was a strange decision to many and van der Poel received a lot of criticism, but he didn’t care. He was focused on winning gold.

After going home to train, the multi-discipline Dutchman was the heavy favorite in the cross-country mountain bike race. However, after a big crash at the ‘Sakura Drop’ on the first lap of the event, van der Poel did not finish.

After trying to continue for a moment, van der Poel abandoned the race with a hip injury. He went to the hospital and fortunately did not suffer any major injuries.

Despite the clean(ish) bill of health, it was a huge disappointment.

Since the crash, van der Poel explained what happened and it’s rather interesting. He explained that a ramp was to blame. Or rather, a lack thereof.

“I was not aware; that plank [ramp] was there during the reconnaissance,” van der Poel wrote on Twitter. “No, I didn’t know anything. In the hospital for [X-rays] at the moment. Too much trouble to finish.”

During practice, a wooden ramp was in place at the ‘Sakura Drop.’ It allowed riders during training to take the big drop without catching air, which helps them to better judge their lines.

Evidently, van der Poel thought that the ramp would still be in place, causing him to misjudge the jump and somersault over his handlebars.

Dutch national team head coach Gerben de Knegt was baffled by the blunder. He said that athletes were aware that the ramp would be removed ahead of the race.

“In training there was a bridge to prevent falls. That is normal, just like it is normal for them to remove it before the race,” he said. “We’ve discussed this a dozen times at the time, so Mathieu knew that.”

Whether he knew it or not, van der Poel forgot and paid the price. Yorkshireman Tom Pidcock took gold in van der Poel’s absense.