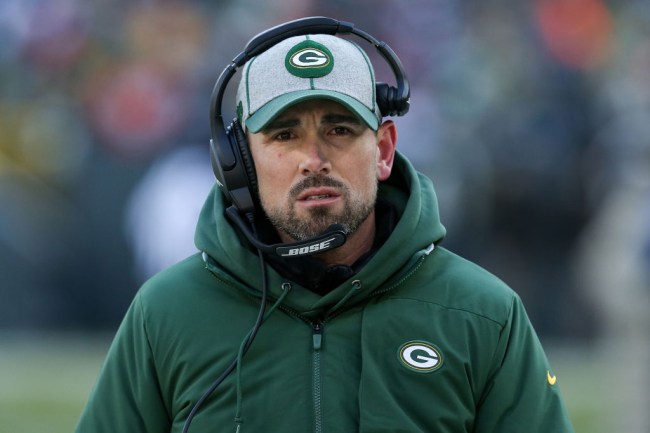 The Packers made the most surprising selection during the first round of the 2020 NFL Draft when they traded up four spots to draft quarterback Jordan Love out of Utah State.

Green Bay taking a quarterback later on in the draft wouldn’t have been too surprising, but instead of picking up a weapon for Aaron Rodgers with the 26th overall pick, the Packers may very well have selected his eventual replacement.

With Love’s arrival, there has been plenty of speculation about what direction the Packers may be moving when it comes to their quarterback room, Brett Favre even believes that Rodgers will elect to leave Green Bay before his career his over.

Head coach Matt Lafleur recently spoke as to why the Packers elected to take Love stating that he was simply the best player on their board at the time.

“It was just one of those situations where there were a couple guys targeted that had just previously been picked and Jordan was the next guy on the board, and so we went with the best player at the time,” LaFleur said on ESPN Radio in Wisconsin.

That’s a totally fine explanation if Love did actually fall into the Packers’ lap so to speak, but that wasn’t the case at all. Green Bay traded up four spots and called Love’s name, a move that certainly tells the story that the Packers had their eye on Love in a major, major way. They didn’t want to risk him falling to another team, hence the trade up in the draft.

The drama that will surely continue to unfold in Green Bay will be one of the more intriguing NFL storylines this season.