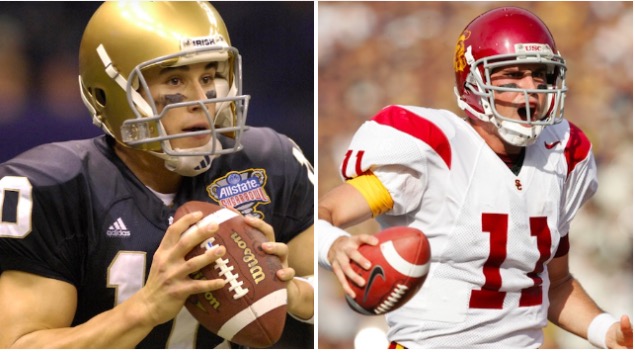 Brady Quinn and Matt Leinart are more similar than they are different: they both helmed the ship of powerhouse teams in the early 2000s, chosen in the first-round of their respective drafts, experienced relatively underwhelming NFL careers, look like they were plucked from the cast of Laguna Beach, and now shared a profession as analysts at Fox Sports.

They should be best bros.

But one thing stands between them: a battle in October of 2005 in which the “Bush Push” was born. With an undefeated USC down 31-28 late in the fourth quarter, Leinart squeaked over the goal line and scored with no time left on the clock and some big time help from running back Reggie Bush. USC’s 34-31 victory kept its perfect season alive while essentially ending Notre Dame’s hopes of reaching the BCS title game

It appears that Brady Quinn is still butt hurt over the play, as he appeared on BTN Take Ten Podcast and had this to say:

“They cheated. They know it. He knows it. I’ve always told him, though, that if you ain’t cheating, you ain’t trying. I would hope my running back would’ve done the same thing for me if I couldn’t have gotten in on a quarterback sneak. But given my track record of quarterback sneaks, I think I probably would’ve been more successful than that.”

Leinart promptly responded on Twitter and a kind-of-playful-kind-of-not exchange occurred.

Sounds like someone can't get over losing 3 years in a row. https://t.co/RbCjgtthfl

Sounds like someone over looks paying players and illegal plays….

Also @MattLeinartQB a great reminder of an ILLEGAL play then, that's Now LEGAL. Just can't pull the ball carrier into the end zone

Things got a little malicious when Brady opted to drag in Reggie Bush, who forfeited his 2005 Heisman Trophy award amidst an investigation into whether his mother received improper benefits from boosters.

There's 2 Heiman winners in that photo….wait….