Carson Palmer Says That Matthew Stafford Is The NFL’s Most Talented Quarterback, We’re Not So Sure 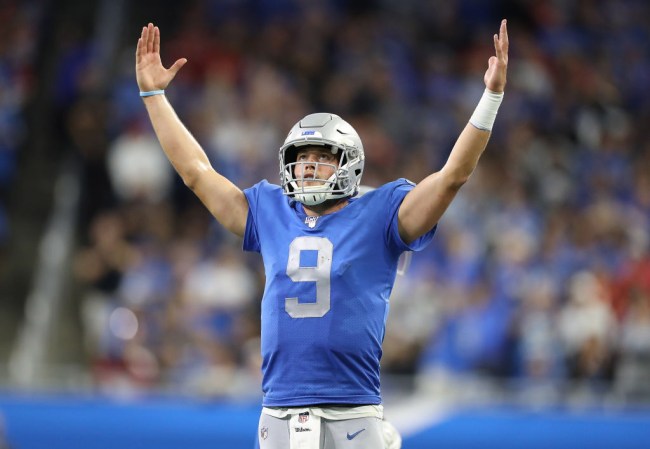 Matthew Stafford is one of the better quarterbacks in the NFL that doesn’t receive enough credit. It doesn’t help that he plays for the Lions who haven’t gotten past the Wild Card round of the playoffs since 1991, but nevertheless, people outside of Detroit don’t talk about him.

He hasn’t had the talent around him, or specifically on his offensive line, throughout his career to take the franchise to a new level.

Stafford has big-time arm talent and his career TD to interception numbers of 246 to 131 isn’t too bad when you think about the talent around him for the majority of his career. It’s totally warranted to call him under-rated or under-appreciated, but Carson Palmer took things a step further.

While being interviewed on Tiki and Tierney on CBS Sports, Palmer said in his eyes he’s the most talented quarterback he’s ever seen.

“I think with my own eyes the most talented quarterback I have ever seen that just doesn’t get his just due and is somebody that people wouldn’t put at the top of their list, Matthew Stafford,” Palmer said. “I think Matthew Stafford has more talent than most of the quarterbacks in the league not named (Aaron) Rodgers and Mahomes. But he plays for Detroit.”

“As far as talent, he’s got more arem talent than 95% of the league. He’s got great feet, he’s mobile, he’s really smart, extremely tough. But nobody knows about it because he plays for the Lions.”

I think this may be a bit of recency biased seeing as how the Lions are off to a 2-1-1 start to the year and have looked pretty solid. Stafford has been tremendous as well with nine touchdowns compared to just two interceptions.

It’s high praise from Palmer, a former NFL quarterback himself, but for him to say he’s the best he’s seen in his eyes and has better arm strength than 95 percent of the league is wild.