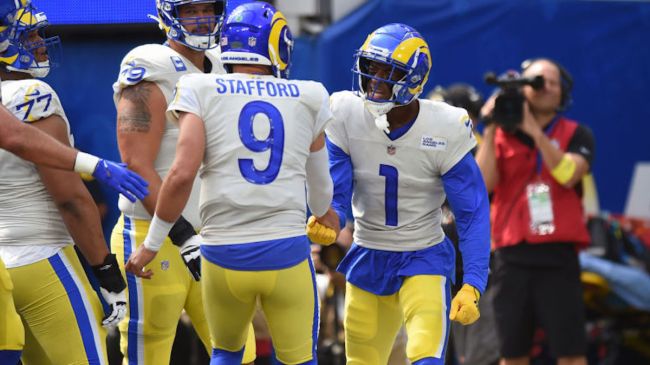 I am currently in the midst of the worst Fantasy Football season of my decade-long career. My team is 0-4 and didn’t even crack 80 points this week. I tried to go running back heavy this year given how many talented pass catchers there are in the league, so I selected Najee Harris (who STINKS) in the first round and Aaron Jones (who doesn’t stink but doesn’t get the ball enough) in the second.

After landing two — what I thought were workhorse — running backs, I then focused on wide receiver, which is truly where my team has fallen apart. Commanders wideout Terry McLaurin, who got a new deal in the offseason, has played with garbage quarterbacks virtually his entire career and still put up respectable WR1ish numbers, so I took him thinking Wentz would be the best signal-caller he’s ever played with. Whoops. Wentz is a career backup in waiting.

Then, in my worst pick of the draft, I took Los Angeles Rams’ to pass catcher Allen Robinson — expecting him to put up OBJ-like numbers on a Super Bowl-winning offense — over the likes of JAYLEN WADDLE. Ouch. Robinson, in particular, has been a remarkable disappointment this season as the 29-year-old has caught just nine passes for 95 yards and one touchdown in four games this year.

NFL fans are wondering why the Rams signed Allen Robinson only for Matthew Stafford to never even look at him, let alone throw to him

With the Rams in primetime last night, the entire country was able to witness what I’ve been suffering through all year, and that is the fact that Matthew Stafford seems to be REFUSING to even look Robinson’s way. As a reminder, the Rams signed Robinson to a three-year, $46.5 million deal during the offseason.

I like how Matthew Stafford doesn’t even pretend to look to Allen Robinson’s side.

Other NFL fans have noticed the bizarre trend, too, and have begun to theorize — perhaps in some uncouth ways — about why Robinson doesn’t seem to be catching any passes this year.

Matthew Stafford when he sees Allen Robinson in the huddlepic.twitter.com/c7Z0DZbMkB

Allen Robinson talking to Matthew Stafford about all the looks Cooper Kupp gets:pic.twitter.com/hOgTIEKgd6

Stafford whenever Allen Robinson has a one on one in the red zone pic.twitter.com/p7h6gmU10U

Allen Robinson trying to get targets from Stafford 4 weeks into the season pic.twitter.com/ch40cnnBMc

Matthew Stafford when Allen Robinson is the only receiver open pic.twitter.com/sNvxm0zpjw

Allen Robinson trying to get Stafford to throw the ball to him pic.twitter.com/C2jOH4qZxs

Is Allen Robinson the highest paid decoy in the league? Stafford never looks his way smh

Is Allen Robinson ass or is Stafford just not targeting him

gm to everyone except for matthew stafford and allen robinson

Matt Stafford when he sees Kupp and Skowronek are double covered so he has to throw off target to Robinson. pic.twitter.com/GNDEWRQ3aB

Allen Robinson waiting for Stafford to throw him the ball: pic.twitter.com/qeEuDdNhds

Following their Monday Night Football loss to the San Francisco 49ers, the Rams and their very broken offense now sit at 2-2 with the rest of the NFC West.

RELATED: Bettor Who Needed Rams To Win To Cash $75K 15-Leg Parlay Filmed Has Descent Into Agony Captured On Video