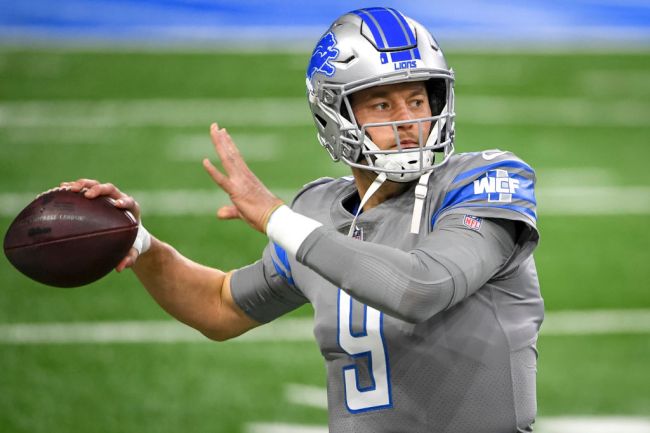 Matthew Stafford is one tough dude. Los Angeles’ newest quarterback has earned his reputation as a warrior throughout his 12-year NFL career and seemingly battles through an injury every season. He did so again in 2020 and started all 16 games despite suffering from a lengthy list of ailments.

The 33-year-old revealed his injuries in an interview with the Detroit Free Press’ Mitch Albom, and they are not insignificant by any means.

“I mean, this past year was bad,” he admits. “I had the partially torn UCL in my right thumb, I tore my UCL on my left elbow on the second to last play of the Houston game that nobody knew about, trying to stiff arm a guy. That’s why I started wearing a sleeve on my left arm because I had all sorts of tape underneath it, just to hold it in place. I broke my cartilage on my eighth rib in Green Bay. I also tore something (in the back of) my left knee. And then I had a subtalar, right ankle sprain.”

Playing with broken rib cartilage, a knee tear and a right ankle sprain are three injuries that would put most players on the injured list by themselves. Having all three at the same time would surely keep much of the league out for at least a game or two— especially during the regular season for a team that is not good and has little chance of making the playoffs.

To play through those three pretty serious injuries is remarkable in its own right, but it doesn’t stop there. A partially torn UCL in his throwing hand and a fully-torn UCL in the opposite elbow are extremely noteworthy occurrences, but Stafford didn’t show up on the injury report for either at any point throughout the season. He didn’t want to talk about it because the people in Detroit were dealing with much more difficult challenges than playing a game.

For those unfamiliar, the UCL is the ulnar collateral ligament. It runs on the inner side of the elbow to act as a stabilizer. In the thumb, the strong band of tissue holds together the middle joint of the thumb, keeping it stable so you can pinch and grab things.

A torn UCL in the elbow is an injury that often times requires Tommy John surgery, where the ligament is harvested from another part of the body and attaching it to act as a new UCL. If it was in his throwing arm, his season would have been over and career would have been in question.

As for his hand, it depends on the significance of the tear. He was able to play through the injury, so the significance can’t be too extreme. Should that be true, it can be placed in a splint and heal itself in anywhere from four to 10 weeks. If the tear is significant, and his thumb is loose, it will require surgery.

Even with his lengthy list of damages, Stafford played pretty well. He completed 64.2 percent of his passes for 4,084 yards and 26 touchdowns last season without a significant supporting cast. The Lions traded him to Los Angeles shortly after the season concluded and he will heal up to try and compete for a Super Bowl with the Rams in 2021.