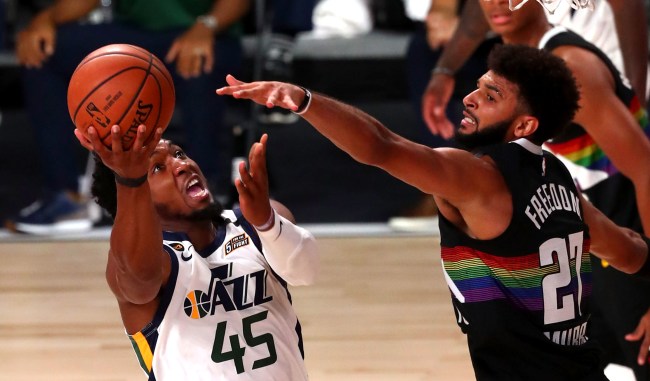 We have seen an innumerable number of outlandish, terrible, and nonsensical hot takes from the many sports talking heads over the years (yes, I am looking at you Skip Bayless), but this latest pile of steaming garbage to come out of Max Kellerman on First Take about Donovan Mitchell and Jamal Murray’s “rivalry” being the NBA’s new Magic vs. Bird might be the dumbest one of them all.

Of course, this is the same guy who three months ago said Kawhi Leonard is more clutch than Kobe Bryant or LeBron James, so who knows what he’s been smoking?

I mean, just look at his face as Molly Qerim Rose is introducing the segment. Kellerman just looks like a guy who cannot wait to say something ridiculous just to get a reaction. 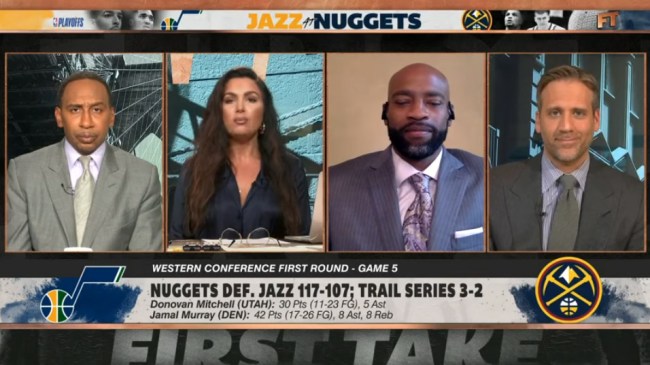 “AllI can tell you is this is the only real rivalry right now, in my mind, in the NBA,” Kellerman said on Wednesday’s edition of First Take. “

Ummm… okay, so far not too crazy. Yes, they both went off for 50 the other day – the first time in playoff history that a player on each team scored that many in a NBA postseason game, so there’s that.

“I know LeBron and Kawhi are now rivals,” he continued. “LeBron’s a bit older than Kawhi. Kawhi grew into the role. Even when he won MVP in the Finals by playing defense on LeBron, LeBron had much more responsibility on his team. Kobe and LeBron never met in the playoffs. You can even go back to like Michael Jordan against Dominique was a slam dunk contest and Clyde was no real rival for Jordan. Jordan was just too good. Bird and Magic was a rivalry. They entered the league at the same time, roughly, and they did more or less the same things for their team. There’s no perfect comparison, but more or less they did the same things for their teams and they met each other in the playoffs and in the Finals and elevated each other’s games. That’s what I see happening here.

“I see two young stars who do more or less the same things for their team. They’re the offense creators and they’re evenly matched and their teams are about evenly matched and they’re around the same age and every night you see one lifting the other’s performance, rising to the challenge to meet an unthinkably high standard, playing even above their heads it seems. That’s a rivalry.”

Did Max Kellerman really just compare Murray vs. Mitchell to Magic vs. Bird?

Needless to say, NBA fans with even a scant knowledge of the league’s history were not having it.

Except Magic and Bird we’re battling each for GOAT consideration since they were rookies....Bird finished top 5 in MVP voting his rookie year and Magic win finals MVP...these dudes are trying to make to the conference finals for the first time

Isiah Thomas met MJ 4 times in the playoffs but since MJ went 1-3 against him MJ's nut hugger superfans like Max blockout or try rewrite history & fail to mention that rivalry. It doesnt fit their GOAT narrative.

Max Kellerman is if recency bias was a person

Mitchell & Murray have played five first round games against each other, they have zero combined MVP's, & neither one's ever made it past the conference semis. pic.twitter.com/eKHGiju1AF

It’s the Magic/Bird rivalry of the first round of the playoffs...

Stay off the weeeeeeeeeed, Max.