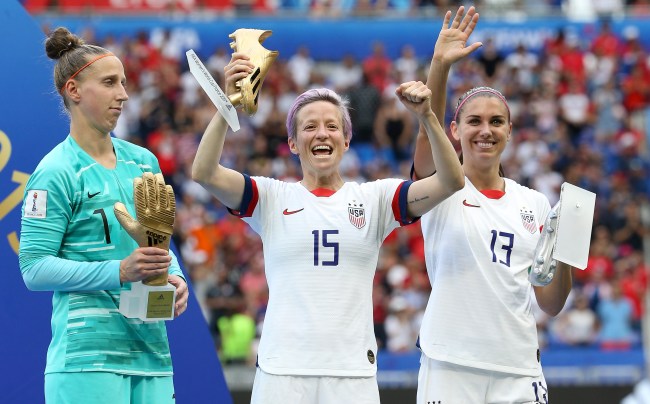 Megan Rapinoe played an essential part in the US Women’s National Team securing their second straight World Cup on Sunday, taking home the Golden Boot and the Golden Ball in the process.

In an interview following the 2-0 victory over the Netherlands, the 34-year-old gave a special shoutout to her brother Brian, saying: “Just one thing: Happy birthday, Brian. I love you so much,” as she blew a kiss to the camera.

"It's unbelievable. It's surreal. I don't know how to feel right now."@mPinoe, BELIEVE IT. 🙌🇺🇸🏆 pic.twitter.com/CCJ1QR20S3

Rapinoe’s older brother, Brian, was not permitted to make the trip to France with the rest of her family to watch the biggest moment in Megan’s professional career due to his checkered past. Brian is not allowed to leave the country as part of San Diego’s Male Community Reentry Program, a rehab program that allows an inmate to finish the final 12 months of his sentence taking classes or working jobs outside of prison.

This is a big improvement for the 38-year-old recovering addict, who  watched his sister play in her first two World Cups from the luxury of solitary confinement.

At 15 years old, Brian brought meth to school and has been in and out of incarceration ever since. At 15, Megan played with her first youth U.S. national team and started traveling the world. As a young inmate and gang member, Brian was inked with swastika tattoos — an allegiance to white supremacy that he now disavows; as a professional soccer player, Megan was the first prominent white athlete to kneel to protest racial inequality.

Despite their different paths, the brother and sister have stayed close through letters, phone calls and texts. “I have so much respect for her. And not just because she’s the s— at soccer. It’s her utter conviction in the things that she believes in and the stances she takes against injustices in the world,” he says.

'Happy birthday Brian! Megan Rapinoe shares her moment in the spotlight with her brother as he recovers from a long-held meth addiction in a rehab center.Brian who been clean for 18 months, disavowed those beliefs in 2010 and all of those hate symbols either removed or covered up pic.twitter.com/uocqSW2Zrr

Brian has served 16 years in prison for various crimes, and told ESPN that he began using drugs at age 12, which led to his heroin addiction.

Thankfully, Brian’s been clean for 18 months now and hopes to turn his life around for good this time.

“My brother is special,” Rapinoe told ESPN. “He has so much to offer. It would be such a shame if he left this world with nothing but prison sentences behind him. To be able to have him out, and to play for him, and to have him healthy, with this different perspective that he has now: This is like the best thing ever.”

Hopefully not being present with the rest of the Rapinoe family for Megan’s achievement will help solidify his newfound belief that drugs are bad.