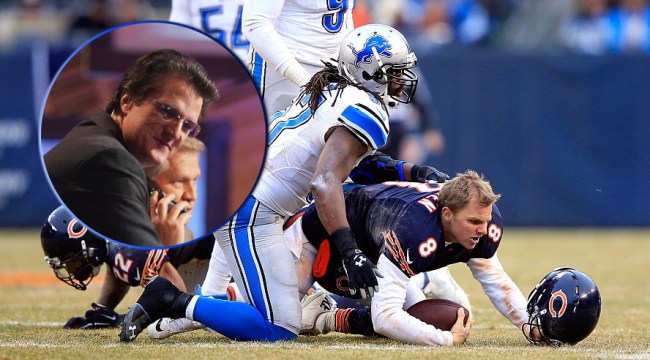 Back during the 2010 NFL Draft, ESPN draft expert Mel Kiper made the bold proclamation that if Notre Dame All-American Jimmy Clausen wasn’t a successful quarterback in the NFL within eight years he would retire. Time’s up, Mel!

Awful Announcing has the receipts…

Kiper had Clausen ranked as the fourth best prospect in the entire 2010 NFL Draft even though most other draft pundits had the QB projected to go in the second round (Clausen was subsequently selected 48th overall by the Carolina Panthers). At the time, people accused Kiper of being biased since he and Clausen shared the same agent, Gary Wichard.

But Kiper only dug in his heels further, making this infamous proclamation on ESPN:

“If Jimmy Clausen is not a successful quarterback in the NFL, I’m done. That’s it. I’m out.”

Replied McShay: “What is your time frame, Mel? When do we make that assessment?”

He should have listened to Jon Gruden.

No wonder the Raiders wanted Chucky back so badly. The guy REALLY knows his quarterbacks.

Oh well, Clausen did take home more than $3 million for his trouble and he is married to former USC volleyball player Jessica Gysin so maybe Kiper meant Clausen was going to be successful OFF the field. If so, see you at the draft, Mel. Good job.