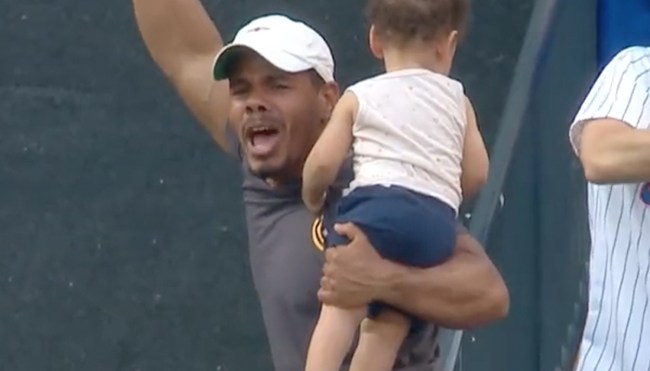 If you were ever relegated to right field during your Little League years, you’re likely very aware that tracking down and catching a baseball is much easier said than done.

The fact that players manage to make those plays look routine means many fans of the game probably think they wouldn’t have much trouble securing a foul ball or a home run if the opportunity presented itself. However, as is the case with encountering a bear in the woods or getting stuck in quicksand, you can prepare as much as you want but have no real way of knowing how you’ll react until you’re actually confronted with the situation.

That’s a lesson that plenty of baseball fans have learned the hard way over the years before having their embarrassing blunders uploaded to the internet for posterity. However, we’ve also been treated to some fantastic highlights courtesy of spectators who’ve made some spectacular snags.

Earlier this year, a guy at a Reds game went viral for reasons that become obvious once you check out the video of him catching a foul ball while managing to make sure the bottle never left the mouth of the baby he was feeding.

On Tuesday, another dad at a Mets game became an instant contender for “Catch of the Year” honors thanks to what unfolded after Starling Marte ripped a home run in the bottom of the first inning.

A number of fans tried to make a play for the ball after it bounced off the centerfield tarp, but none of them were able to outdo the guy who was forced to make a one-handed catch because he was too busy using his other arm to hold a small child.

GIVE THIS DAD CATCH OF THE YEAR! 🏆 pic.twitter.com/Nratabnmk1

Hannah Keyser of Yahoo Sports wasted no time heading down to the stands to chat with the fan who identified himself as Alan, who got an unreal souvenir to commemorate the first time he attended a game with his one-year-old son Levi.

This is Alan, who made that incredible catch, and one-year-old Levi who is attending his first baseball game. https://t.co/yO1lwcepWA pic.twitter.com/R2dNaJWMdD