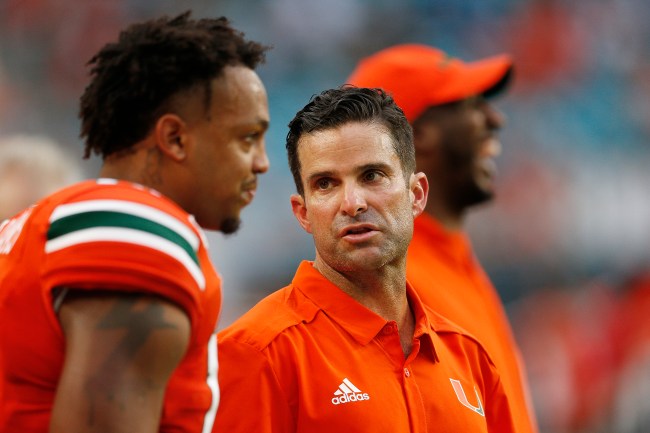 The worst thing to happen to the University of Miami today is their most famous alumnus blatantly shilling for another school while his alma mater disintegrates around him. Just dropping a People’s Elbow on his diploma like he needs the money. Even Drake would scoff at this convenient betrayal.

The second worst thing is a report written by the Miami Herald’s Barry Jackson.

This may come as a shock to you guys so you might want to be sitting down for this.

Students at the University of Miami are abandoning their responsibilities to party with beautiful women in the everlasting aphrodisiac of warm weather. GASP!

This is expected if you’re an average schlub, but when you make the school millions of dollars and forfeit millions more if you suck, then the paradigm begins to shift.

The Herald spoke with multiple people around the program, including a veteran player, who had insidious insight into what contributed to a disappointing 6-7 season.

…a few players seem more concerned with partying than focusing on football and that a handful (including a prominent one on offense) broke curfew the night before the FIU loss to go out.

The loss is referring to the Hurricanes laying a goose egg in a 14-0 bowl loss to Louisiana Tech. The “immaturity infiltrated the quarterback room,” the team’s vital organ, and the lack-of-example was set from there.

Another conduit for what one player described as a “do what they want” mentality under head coach Manny Diaz is that players took full advantage of Miami’s drug policy, which does not call for suspensions for first violations. Players are absolved after 10 hours of community service.

Diaz reportedly reminded players before the Independence Bowl that breaking curfew, drinking and smoking weed would not be permitted.

I’m not the guy to try to convince you that smoking weed is an indicator of irresponsible behavior, but I will say that freshman quarterback Jarren Williams just not showing up for practice one day and playing the following Saturday is an example of a broken leadership structure.

One player said there were multiple missteps with Williams regarding maturity, including inexplicably picking himself up some running yards instead of tossing a hail mary as the half expired in the Independence Bowl.

Clearly, Dan Enos wasn’t happy with Jarren Williams deciding not to throw the Hail Mary. That relationship sure looks frosty, based on body language. pic.twitter.com/vJEkuzvroN

It should be noted that none of this would even matter if Miami was good at football. Miami is a breeding grounds for chaos if and only if that chaos leads to W’s.