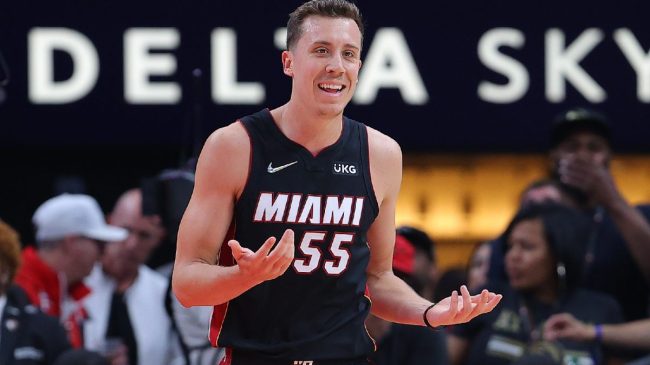 The Miami Heat find themselves in a tight battle with the Philadelphia 76ers.

The second-round series is now tied at two games apiece, with each team defending home court. Miami jumped out to a 2-0 lead with the contest being played in South Beach, but since the return of MVP candidate Joel Embiid, the 76ers have reeled off a pair of decisive wins to even the playing field.

In these last two losses, the Heat are shooting 41% from the field including an abysmal 21.5% from beyond the arc. The team has shot 25% or less from three-point land in three of four matchups, allowing Philly to stay in games.

What’s been baffling is the fact that the team’s best three-point shooter remains on the bench.

Duncan Robinson led the team in makes from beyond the arc this year, averaging just under three makes per game. For his career, the forward is connecting on over 40% of his long-range attempts becoming one of the steadier three-point shooting threats in the NBA.

But in Miami’s series against Philadelphia, he’s played a whopping one minute of action. Making things worse, the Heat recently signed the sharpshooter to a $90 million deal. Why pay Robinson if he’s not going to see the court?

Duncan Robinson has played well when given the chance

Robinson averaged 10.9 points per game this season, including a 37% clip from beyond the arc. Just as recently as Game 1 of the Heat’s opening series versus Atlanta, the forward scored 27 points while shooting 8 for 9 on three-pointers.

In that first series, Robinson tallied 36 points on 55% shooting from the field (52% from three).

But he’s yet to be used against the 76ers despite the fact that Miami has been absolutely awful from deep. To put it in perspective, those eight makes in Game 1 against the Hawks were more than the Heat have made in each of their last two losses as a team.

With Miami falling behind early due to poor shooting performances, why not give Robinson an opportunity?

Heat fans are asking themselves the same question on social media.

At some point, Spoelstra is going to have to give Duncan Robinson a chance to make a few threes that the Heat keep missing.

Duncan Robinson got compared to Klay Thompson and ain’t touched a court since. $90Ms to vibe on the bench.

Duncan Robinson scored 27 points in 23 minutes, including 8-of-9 from 3, in Game 1 of the Atlanta series three weeks ago. He now lives under an assumed name in a nondescript subdivision in Hialeah in return for testifying as a government witness.

Heat now 5-31 from 3 in this game. Duncan Robinson just sitting there on the bench still.

It certainly is interesting to see. Miami returns home for Game 5 as they look to get back up in the series. We’ll see if Robinson gets an opportunity should these shooting woes continue.