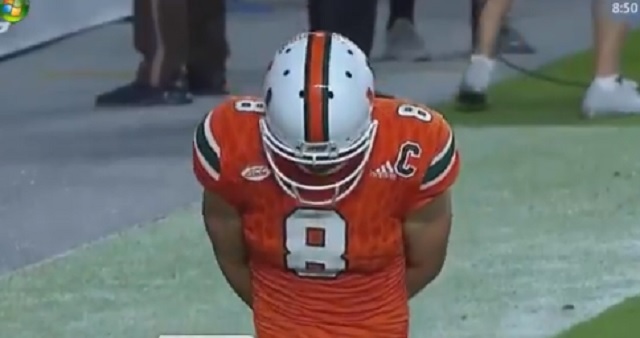 Senior wide reciever Braxton Berrios is aware of the long history between Notre Dame and the University of Miami football team.

Three decades after the famed “Catholics vs. Convicts” game, No. 3 Notre Dame and No. 10 Miami are currently playing in an huge matchup with enormous national implications.

Back in 1988, both teams were undefeated when a pair of Notre Dame students created the “Catholics vs. Convicts” T-shirts, playing off Miami’s reputation as misbehaved “thugs”.

After scoring the opening TD in tonight’s game, University of Miami wide receiver Berrios referenced the famed “Catholics Vs. Convicts” moniker when he celebrated by putting his hands behind his back and pretending to be handcuffed like a “convict”.

The moniker of “Catholics vs. Convicts” was created back in the 80’s and still carries a significant stigma with the Canes team.

Berrios, who was recently named a Jason Witten Collegiate Man of the Year Award semifinalist, seems like the perfect person to poke fun at the whole “convicts” stereotype.

Presented annually to the Division I college football player who has demonstrated a record of leadership by exhibiting exceptional courage, integrity and sportsmanship both on and off the field. The award honors the type of exemplary character and commitment to community, family and teammates demonstrated by Jason Witten, the 2012 NFL Walter Payton Man of the Year and one of the most prominent role models in the game.

Nominees are gathered from the Sports Information Directors of each NCAA Division I football-playing institution. Three finalists are selected by the award’s board of directors, and the winner is selected by a panel of prominent former players and coaches, as well as members of the college football media