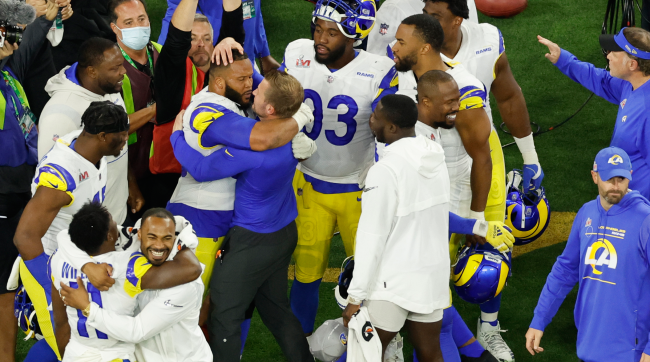 With 43 seconds left in Super Bowl LVI, the Los Angeles Rams needed just one stop on fourth down and one yard to go to become champions.

On the sidelines, with the key fourth down play coming up, Los Angeles Rams head coach Sean McVay tried to rally his defense to just make one big play.

“Hey! What else could you want?!” coach Sean McVay asked his defense in mic’d up footage captured by NFL Films.

McVay then turned his attention to arguably the best football player in the NFL, number 99 Aaron Donald.

“Hey, Aaron!” the coach shouted. “This is the moment! Right now!”

Sean McVay predicted Aaron Donald was going to do something special

The footage then cuts to McVay, hands on knees, waiting for the snap of the ball on fourth down.

“Aaron Donald’s gonna make a play,” the Rams coach said, almost under his breath, to no one in particular.

After Donald does indeed make a play, McVay is seen jumping and shouting on the sideline, “Yes! I knew it!”

Cut to the celebration after the final gun and we see McVay chasing down Donald.

He wasn’t wrong. (Though it may have helped that Aaron Donald was lined up offsides on the key play, but that’s a story for another day.)

I literally got goosebumps just watching this 😭 craaazy

@AaronDonald97 that is absolutely what being the moment, not letting the moment be bigger than you looks like. So happy for AD as a football fan. Absolutely deserves this!

This gave me chills. So happy for him.

That was a Rocky moment, the knock out punch!