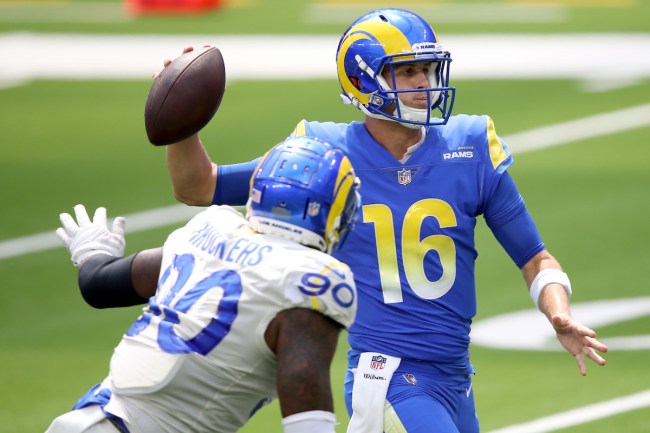 Imagine being Michael Brockers today, who, after playing nine seasons with the Rams organization, found out that he was traded to the Detroit Lions. It’s already bad enough to be traded, but it has to suck packing up boxes knowing you’re going from sunny Southern California to gloomy Detroit. Not only that, the Lions haven’t exactly had a track record of success, which the Rams have had over the past few seasons.

Then there’s this little nugget: Brockers will be reunited with his former teammate Jared Goff. While that seems pretty cool on the surface — even though one plays defense and the other patrols the offense — well, the two players might have to have a little kumbaya session at some point this NFL offseason. That’s because, following Goff’s blockbuster trade to the Lions a few months ago, Michael Brockers figuratively kicked the guy while he was down, talking to TMZ about how the Los Angeles Rams could now be real Super Bowl contenders without Goff under center.

“Is it a level up? In my heart, deeply, just understanding what [Stafford] brings, it’s a level up [over Goff]. It’s a level up.”

Look, 9 out of 10 people will probably agree that Matthew Stafford is an upgrade at quarterback over Jared Goff. But for Michael Brockers to get caught saying it publicly just looks bad. Even worse, it was while he was being hounded by those TMZ folks who seem to interview famous people at the most awkward moments. Still, the defender probably should’ve been a little more choosey with his words, and just said something like “I’m excited for next season to start and see what we can do,” or something like that.

Now Brockers and Goff have this dark cloud hovering over the Lions locker room before either one actually steps foot in it this NFL offseason. It probably won’t be a big deal when all is said and done, but, sheesh, if there was already any tension between the Lions’ defense and the offense before this — or players wondering if the former No. 1 overall pick can be “the guy” in Detroit — it just got magnified even more if the new guy isn’t advocating for the starting signal-caller.