Michael Jordan Used To Predict When He’d Drop 40 Points In A Game, According To Ex-Wizards Teammate 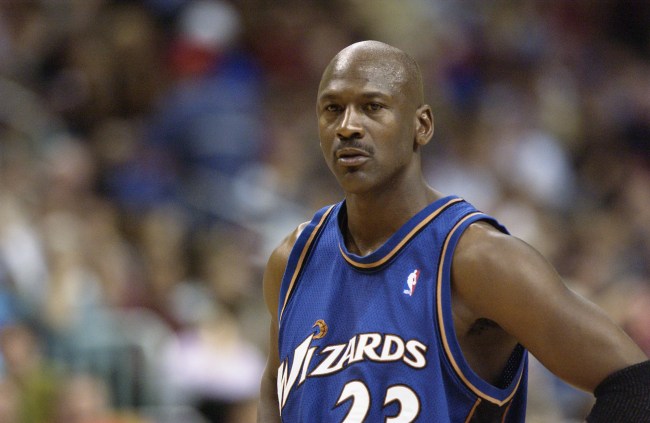 The already insane legend of Michael Jordan just continues to grow and grow, doesn’t it? Already perceived as the greatest basketball player ever, MJ did more than just win six titles during the ’90s with his Chicago Bulls teams, he reinvented what it meant to be ruthless towards opponents, competitive AF with his own teammates and defined what the word “greatness” looks like.

Between all of his accomplishments on and off the basketball court, Michael Jordan has accomplished more than more of us could ever dream of. And, thanks to The Last Dance documentary — the highly-anticipated ESPN series detailing Jordan’s final season with the Chicago Bulls in 1997-98 — we just continue to hear about the things that made MJ so different.

That’s right, according to one of his former Washington Wizards’ teammates, Jared Jeffries, Jordan reportedly used to do just that — as incomprehensible as it may seem.

Even at the age of 38 and playing on cranky knees and a worn down body while with the Wizards, Michael Jordan could drop 40 based off nothing more than a gut feeling and intuition he had during games. Just look at how Jeffries described it while recently joining the Wizards Talk podcast.

“It used to be so crazy how he could break a basketball game down. He could tell you ‘tonight I feel good, I’m gonna go for 40.’ I remember we were playing Atlanta at Verizon Center, Capital One [Arena] now, we played there and walking out on the court he goes ‘I’m gonna get 40 tonight,'” Jeffries said.

“He would break down getting 40 points. It would be like 10 free throws, a couple layups in transition, curl screen; little things where he knew how to break the game down to get 40 points. It’s like ‘dang man, it’s that easy for you to go out and get 40.’ He could just feel a 40-point game coming on. When for everybody else, it was a career-high, but for him it was like ‘tonight I’m gonna have 40 or I’m gonna have 50.’ And it would be done.”

Uh, what planet is Michael Jordan actually from in order to accurately do something like this? There have been stories about MJ telling opponents about things he’d do before actually doing them, but to say before or early on in a game that he was going to go for 40 points — and to break down “easy” ways to get his — is a level most athletes couldn’t even fathom getting to.

As mentioned earlier, Jordan’s legacy just continues to grow thanks to The Last Dance documentary, and, while most stories like this Jeffries one would seem mythical if it were about anyone else, because it’s about His Airness, everyone literally takes it for face value and has no reason to doubt it’s actually true. Yep, Michael Jordan’s just that different.