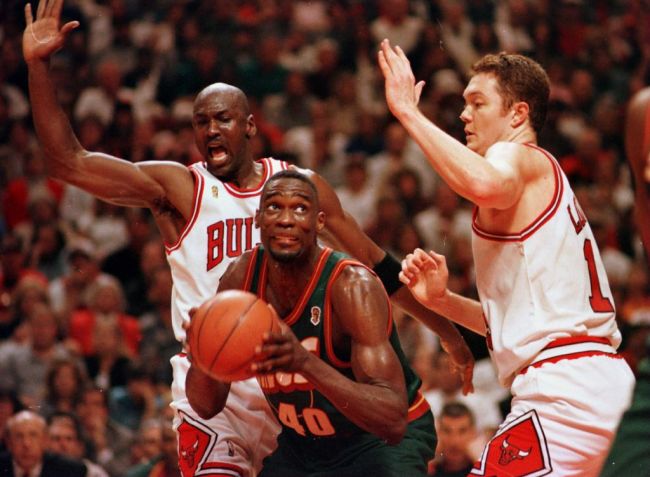 According to the world’s most popular documentary, Luc Longley played less of a role in the success of the Bulls dynasty than Jordan’s shrugging security guard, Carmen Electra, and the staffer who washed MJ’s jock strap.

After the 7-foot-2 Australian center admitted he was “hurt” by the omission, Jordan claimed his one regret from the 10-part series was not recognizing Longley, who averaged a respectable 11.4 ppg in his final season with the team in ’97.

Director Jason Hehir cited Longley’s proximity to the production, as he lives in a remote region of Western Australia, but Longley’s wife said her husband was forced to change his phone number from the tidal wave of phone calls aimed at discovering why the 3x NBA Champion was totally glossed over.

Whatever goodwill MJ made up for in admitting he made a mistake was shattered by a story he told ABC News Australia about his Aussie teammate in which he prefaces the recollection with: “He may not like this story.”

And I looked at Luc and I said, ‘You know what Luc, that is the last time I’m going to give you a compliment in the middle of the game.'”

It’s a bit confusing why Jordan won’t give Longley his roses. Maybe it’s because Longley’s a self-described “hippy” who had dreams of becoming an underwater architect and was never really serious about basketball.

At 16, Longley was offered a scholarship at the Australian Institute of Sport (AIS) during a time that coincided with the breakdown of his parents’ marriage.

“I wasn’t serious. I wasn’t down in the gym like all the other guys,” Longley admits. “People around at that stage said, ‘Oh, he’s not going to make it. He doesn’t want it badly enough.’”

Maybe Longley’s omission from The Last Dance wasn’t due to geographic logistics, but his apathy toward the game of basketball. I can’t imagine that sat well with basketball sociopath Michael Jordan.