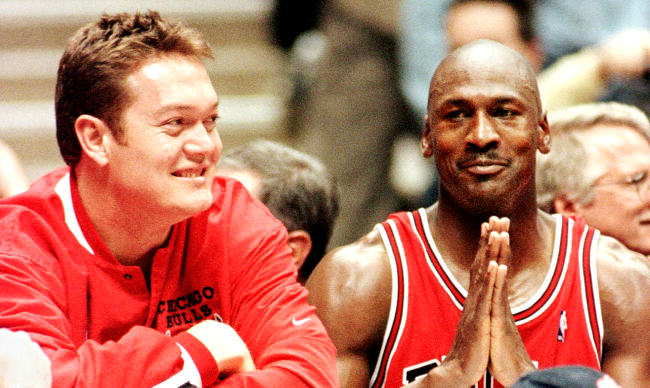 There were numerous moments during the popular ESPN documentary The Last Dance where Michael Jordan could have done or said something that he now regrets.

For instance, MJ did not exactly portray his sidekick on the six-time champion Chicago Bulls, Scottie Pippen, in the greatest light during the 10 episode docuseries.

Related: How Tim Grover Went From Training Housewives At A Local Health Club To Sculpting Michael Jordan In His Prime

None of those moments, however, stand out as one that His Airness regrets.

Instead, Jordan’s biggest regret from the docuseries centers around a center: his former Bulls teammate Luc Longley.

In a extensive new feature on Luc Longley for the Australian Broadcasting Corporation (ABC), Michael Jordan admits that if he could go back and redo The Last Dance he would have given more attention to the 7-footer who helped him win three championship rings.

So imagine Longley’s disappointment as each of the 10 episodes dropped and it became clear his contribution would be ignored. But for the odd fleeting background shot, the 52-year-old had been wiped from history.

“Sitting there on the couch and watching episode after episode where I wasn’t in it — yeah, I was bummed about that,” Longley admits.

“I know it hurt him,” says former Bulls teammate Steve Kerr. “I watched it with my kids and I thought about Luc’s omission from it and how much he lost from that, and I feel bad for Luc.”

“I think the worst part for Luc was that the phone was ringing all day and night,” says Longley’s wife, celebrity chef Anna Gare. “Everyone wanted to know, ‘Why aren’t you in it? … How are you feeling right now?’ Like, drama, drama, drama.”

Longley, as usual, was quiet on the subject, and even changed his phone number to stop all the calls about the documentary.

Jordan, when asked why Longley was basically omitted from the 10-part series, responded, “I can understand why Australia would say, ‘Well, why wouldn’t we include Luc?’ And we probably should have. And if I look back and could change anything, that’s probably what I would have changed.”

Longley joked that maybe he was omitted from The Last Dance because “the self-deprecating Australian in me thinks it’s because I’m not that exciting. I was playing a huge role but it wasn’t one that was that sexy.”

However, director Jason Hehir says Longley’s omission was basically all about money and logistics since Luc lives in a remote corner of Western Australia.

“I didn’t expect to be a heavy feature in it because they hadn’t interviewed me, but I did expect to be in it more than I was,” said Longley, adding, “I would like to have been in the doco so that Australian kids saw that there was an Australian in that team doing that thing.”

Read the entire in-depth piece on Longley and his basketball career over at ABC.net.au.