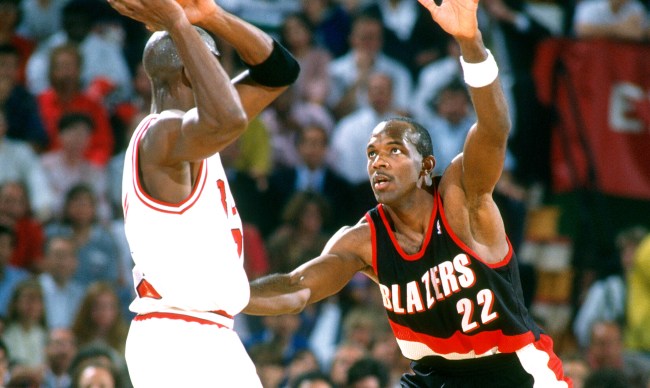 Several people who were discussed or mentioned in the ultra-popular ESPN documentary The Last Dance about the 1997-98 Chicago Bulls were less than thrilled with how they were portrayed or with comments Michael Jordan made about them.

Among those offended through the documentary’s five-week run were Horace Grant, Scottie Pippen, Gary Payton, and apparently, Jordan’s teammate on the Dream Team, Clyde Drexler.

As viewers of The Last Dance may recall, Jordan said he “took offense” at being compared to Drexler during the 1992 NBA Finals.

On Monday, in an interview with the The A-Team on SportsTalk 790, Clyde “The Glide” responded to Jordan’s dismissal.

“That’s Michael’s documentary so obviously it’s going to be from his perspective,” said Drexler. “Everybody is entitled to their own opinion. A lot of times guys didn’t like each other from other teams, but as you get older, you’ve got to get beyond all of that and show some love and some respect for the people you played with and against.”

However, as Drexler has gotten older, it doesn’t sound like he has totally gotten “beyond all of that” as he added during the interview, “This is a team game, it’s not one guy. You can have 50 points and 40 rebounds but if you lose, are you less of a player than anybody on the other team? No, it’s a team game.

“So I hate when people act like it’s an individual competition. I didn’t take 35 shots and get 20 free throws a night, so I wasn’t going to score 40 points a night.”

Hmmm… I wonder who he could possibly be referring to?

Listen to “Clyde Drexler Discusses The Last Dance, His Career & How James Harden Takes The Next Step” on Spreaker.