Did You Know Michael Jordan Was Clearly Airbrushed Out Of The Topps Card Of John Starks’ Iconic Dunk? 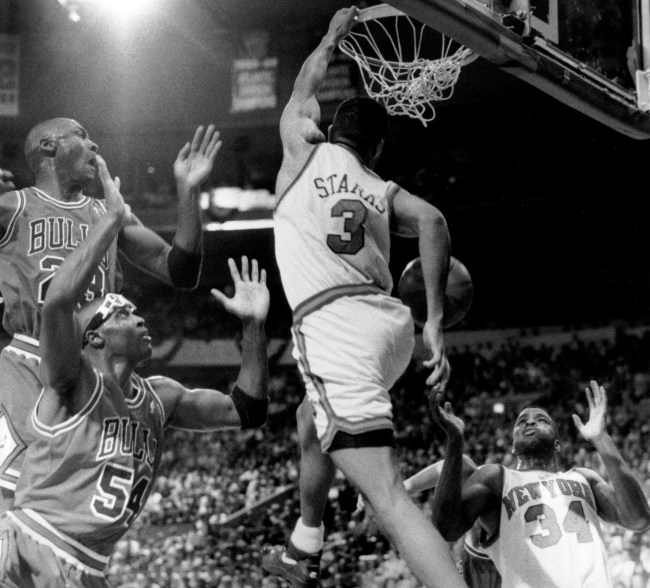 Michael Jordan is always trying to get the best of somebody else, even admitting in one of the most recent episodes of The Last Dance that he has a “competition problem,” which, to me, means he’d stop at nothing to embarrass another person if given the opportunity. Whether that was on the basketball court, the golf course, at the Black Jack table, it didn’t matter, ’cause MJ was always going to get the last laugh.

But in the NBA, that’s not exactly feasible — since, unfortunately, posterizing happens. We’ve seen some of the best players in league history end up on a poster while trying to (foolishly) swat an oncoming dunker; and Michael Jordan has had a few instances where this happened, with John Starks’ iconic jam against the Chicago Bulls in the 1993 playoffs being one of the most memorable.

For those who need a quick reminder of Starks’ dunk over MJ and then Bulls teammate Horace Grant, take a look at the video below.

It’s pretty evident that Michael Jordan is in that video, right? Like, my eyes haven’t been lying to me for the past 20+ years. We can all agree that No. 23 is very clearly attempting to defend John Starks in that video.

However, when you look at the Topps trading card of the iconic dunk, Jordan is nowhere to be found. Seriously, just look at a Twitter conversation between WNBA superstar Sue Bird and the Ball is Life handle, which showed a side-by-side look at MJ’s exclusion from one of the images.

So what in the hell happened here? Did Michael Jordan pay Topps to remove him so not to be embarrassed by John Starks? Did his competition problem kick into high gear and he couldn’t handle another NBA player getting the best of him? Well, not exactly.

The real answer is this: Topps had to remove Michael Jordan from the image because he has an exclusive partnership with Upper Deck, meaning the GOAT was legit photoshopped out of the Starks photo — which is hilarious because it’s just about the only picture in which he’s getting absolutely owned in. Can anyone else remember a time MJ was stuffed on like this? Probably not. Either way, this is a power move by Jordan.

While Upper Deck could’ve printed the card themselves and featured Michael Jordan, well, obviously, they didn’t. They were paying the six-time champ lots and lots of money to endorse their trading card brand, so why in the hell would they reprint an image of their star being posterized? That wouldn’t have been the smartest business decision — and something tells me MJ wouldn’t have allowed it.

So for all you ’90s kids like me who grew up swapping trading cards and checking how much they were worth with the latest Beckett, here’s a reminder that not everything we saw in those images was truth. Anyone else now feel lied to?