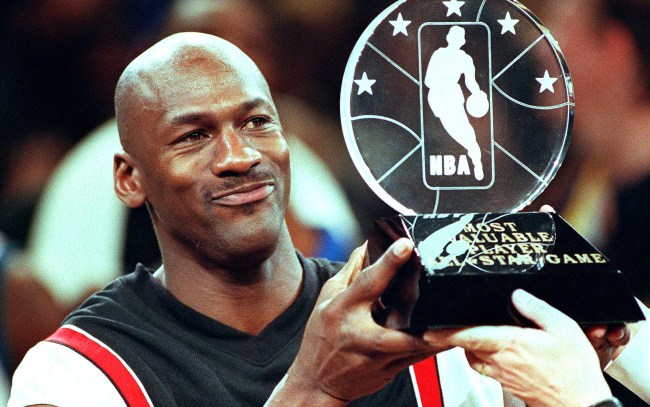 Here’s another Michael Jordan story that’s pure MJ. After the legendary “flu game” which turns out was in reality, the “food poisoining game,” His Airness insisted that everyone around him had to order the exact same thing that he did.

During an appearance this week on The Dan Le Batard Show with Stugotz, Michael Jordan’s longtime trainer Tim Grover was asked about “pizzagate” as Le Batard referred to it.

“Did he after the pizzagate incident then did he then have a royal taste tester?” Le Batard asked Grover. “Was there something done so that that would never happen again?”

“So, it’s funny. The next day when the food was being ordered, obviously you know what happened, there weren’t many games left after that, but we would do is we would end up all ordering the same thing,” replied Grover. “Whatever he decided to eat, George had to order the same thing, I had to order the same thing. And it was kind of like playing Russian roulette. So we were just like, who’s going to pick one and see what happens? He kind of laughed it off. He kind of made fun of it afterwards. No taste tester. Maybe if there was another going to be another season afterwards, hey, you know, possibly that would have been a job that could have been created.”

Le Batard also wanted to know if it is true that Michael Jordan used to spit on his food so no one would eat it.

“Michael was very territorial about his food,” recalled Grover. “You know, it was just like, this is my food. He didn’t like anybody picking up any food off of his plate or so forth. Now when he would spit on his food it’s not like he took a big noogie and this big thing landed on his food. It was like he would like playfully you know kind of do one of them [makes misty spitting sound] on his food just to claim, ‘hey, this is mine,’ but it wasn’t like you know, he was getting way down deep in the throne and in the nostrils to put this big thing on his food.”

Grover also dismissed the speculation that’s been made with paying thinking Jordan was actually just hungover.

“In that three-peat run Michael never missed a game, never missed a practice, never missed a workout, and averaged 38 minutes a game,” said Grover. “How many players in this generation, and you guys will have better references and stats, let’s say over the last 10 years, played every single game for three straight years and played 38 minutes. Now everyone knows Michael enjoyed a cocktail from time to time, but not to the point where it was going to be detrimental to his performance on the basketball court.”

Of that I have little doubt.