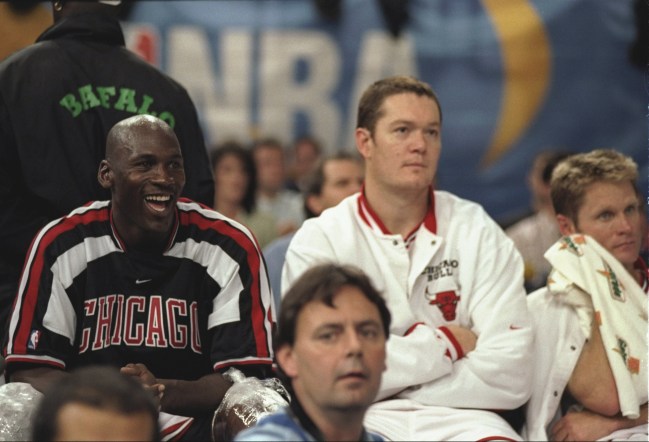 Everyone else bummed out that we’ve almost reached the end of ESPN’s The Last Dance? It has been such a phenomenal distraction on Sunday nights over the past month I can barely remember what I was ever doing on Sunday nights other than watching Michael Jordan react to things on an iPad.

Episodes 7 and 8 aired this past Sunday and many people on social media have already expressed that they think these were the two best episodes yet. One moment that really caught my attention was the Steve Kerr saga.

Jordan and then-Bulls guard Steve Kerr got into it during training camp prior to the 1995-1996 season. During episode 8, Steve Kerr discussed what led up to him punching Michael Jordan which he described as ‘the best thing that I ever did’. He’s referring to standing up for himself and not necessarily the act of punching MJ but in this instance, they’re one and the same. Steve Kerr’s only 6’1 and Michael Jordan’s 6’6″ and one of the greatest athletes in history…Not exactly an even fight

Here’s the story from episode 8 for anyone that hasn’t caught it yet or wants to relive that moment. Kerr knew that Jordan could probably beat him to a pulp if he wanted to:

“I have a lot of patience as a human being, but I tend to snap at some point ’cause I’m extremely competitive too, just not really good enough to back it up usually, but if I’m going, I’m going to fight,” Kerr recalled in the documentary.
“I knew that if we were in an actual fight he could actually probably kill me if he wanted to […] It was more just I’m going to stand up for myself.”
Despite being only 6ft 1, Kerr threw the first punch and hit Jordan in the body, before MJ retaliated and landed a few punches of his own, leaving Kerr with a black eye before teammates managed to separate the duo. (via Newsweek)

Jordan went on to share how he immediately realized that a line was crossed and he needed to do something about it.

“I’m in the shower and I’m saying ‘Look, I just beat up the littlest guy on the f*****g court,’ and I felt about this small,” he recalled.
“So when I get in the car, and I call back to the United Center [the Bulls arena] I said ‘Please give me Steve Kerr’s number.’
“I call Steve and I apologize and I said ‘Look man, it had nothing to do with you. I feel bad.'”
“He [Kerr] earned my respect because he wasn’t willing to back down to be a pawn in this whole process,” Jordan explained. (via Newsweek)

And this is the point where Kerr reflects on it being the best thing he’s ever done. Not winning the NBA Championship 5-times as a player and 3-times as a coach. Punching MJ was better.

“We talked it out and it was probably, in a weird way, the best thing that I ever did, was stand up for myself with him because he tested everybody he played with, and I stood up to him,” he explained.

“From that point on, our relationship dramatically improved and our trust in each other, everything, it was like ‘All right, we got that out of the way, we’re going to war together’.” (via Newsweek)

Steve Kerr: [referring to Michael Jordan] One time, he punched me in the face. It was AWESOME. #LastDance pic.twitter.com/dW6ob898JF

Steve Kerr when Mike got kicked out of practice pic.twitter.com/cS5v1HKBCc

Ahead of #TheLastDance tonight on ESPN, Steve Kerr Scouting Video. The Arizona guard shot 57.3% from 3 on 199 attempts (5.2 per game) as a senior. pic.twitter.com/adCo8iqsS0

Steve Kerr swung on Michael Jordan and y’all think these players today wouldn’t have done anything???

It’s definitely a bummer that The Last Dance will come to a conclusion next Sunday but the silver lining is we still have TWO MORE episodes before it’s all said and done.