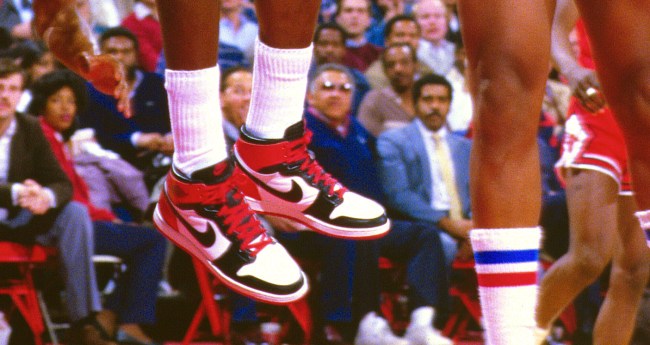 The myth surrounding the NBA banning Michael Jordan’s original Nike shoes from being worn during games has grown and changed exponentially throughout the years.

Many sneakerfiles believe that it was the black and red “Bred” Air Jordan 1 that the NBA had a problem with, but that’s probably not the case.

As internet sleuths have discovered, it was more than likely a black and red pair PE edition of the Nike Air Ship with “Air Jordan” written on the heel.

The real “Banned” Air Jordans (AKA the Air Ships). One of the first two pairs of sneakers Nike gave MJ in 1984, worn during MJ’s rookie training camp. 😳🤩 📸: @GoodwinSports pic.twitter.com/LPPANxZNLl

Of course, Jordan and Nike were more than happy to let the legend of the “banned” Air Jordan 1 sneakers grow.

David Falk, Michael Jordan’s agent at the time he signed with Nike, appeared on The Business of Sports podcast last week and talked about how great the entire controversy over the NBA “banning” Jordan’s shoes turned out to be for His Airness and Nike.

“So they make the first shoe, the black and red one. Michael wears it to practice and the league immediately bans the shoes,” explained Falk. “They ban it, they say it doesn’t conform with the team’s uniform colors. And (Rob) Strasser calls me up in a panic and he says, ‘Goddammit. We just paid him all this money, he can’t even freakin’ wear the shoe.’

When Falk found it about the NBA banning Jordan’s new shoes he was thrilled.

“I said, ‘God, that’s great.’ They said, ‘Really, what’s great about it?’” Falk continued. “We’re gonna do a banned in Boston commercial. So what the hell does that mean? So we do a commercial that basically says these shoes are so special that the NBA banned them because it gives Michael a competitive advantage.

“And the first commercial we ever did, they panned from head to toe, and they said like in real serious, I’m messing up the day, but, ‘On October 15th, Nike came out with a revolutionary basketball shoe called Air Jordan. On October 27th, the NBA banned the shoe.’ And they had the Dragnet… the chisel sound, and said, “Fortunately, the NBA can’t ban you from wearing it.’ And the shoe… I mean, we couldn’t have asked the NBA for a better intro than banning the shoes. And it starts selling out the wazoo.”

Listen to Falk’s entire two-part interview where he discusses more about The Last Dance and his relationship with Michael Jordan below.