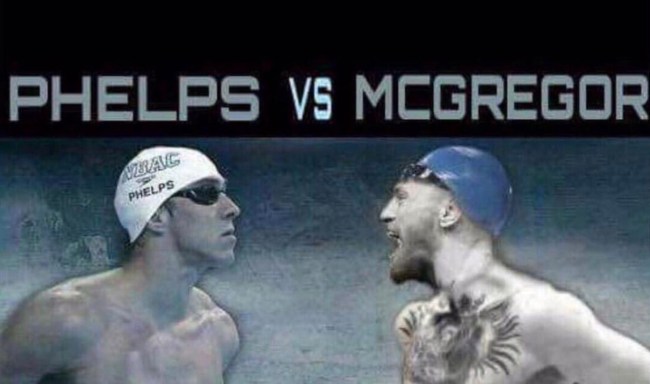 Both Michael Phelps and Conor McGregor have stepped outside their respected strong suits to take on seemingly unwinnable contests. Phelps raced a CGI shark in the ocean earlier this summer for Discovery’s “Shark Week.” McGregor ditched the Octagon for the boxing ring to take on the undefeated Floyd Mayweather. Phelps is thinking out of the box once again and challenged McGregor to a swimming race.

Hats off to @TheNotoriousMMA …… amazing competitor and unreal athlete…congrats to @FloydMayweather 50-0 congrats! #legend

On Tuesday, Phelps suggested that McGregor should try competitive swimming and go up against the best in the world in his first test.

All of this talk… Should we race as well?? @TheNotoriousMMA pic.twitter.com/l3JoMgb1qT

Nothing like making your professional swimming debut and go up against the man-fish that has 28 Olympic medals. Not saying that McGregor’s confidence would stop him from thinking he could beat Phelps in a race. The idea was floated by “Saturday Night Live” last week.

If the money was enough, McGregor would swim against Phelps and the shark, especially when McGregor busts out this unique swimming stroke.