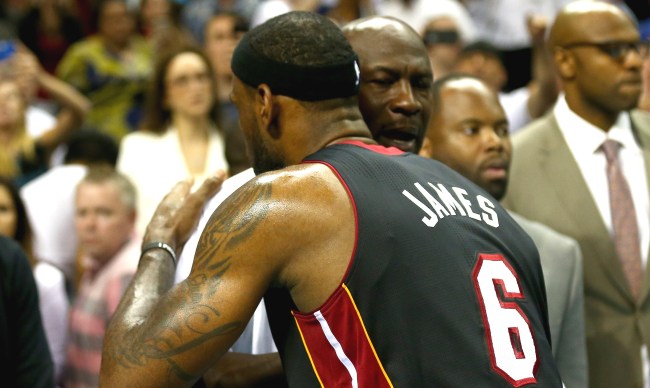 Longtime sports scribe, current co-host of Pardon The Interruption and Chicago native Michael Wilbon had more access to The GOAT Michael Jordan than almost anyone outside of his family back in the day.

As such, Michael Jordan used to call Wilbon personally when he had a gripe or a suggestion about things that were being written about some of the young stars in the NBA like Steph Curry, Russell Westbrook, and LeBron James.

Obviously, any news about how Jordan feels about LeBron considering all the GOAT comparisons currently taking place, escpecially with the popularity of the ESPN documentary The Last Dance currently airing.

During a call to The Rich Eisen Show on Wednesday, Wilbon spilled some tea on that very topic.

“This is an off-the-record thing that he would probably frown on me for telling, but I’m going to tell it,” Wilbon revealed. “There were times earlier in LeBron’s career, and sort of sprinkled throughout, where people got critical of LeBron. Whether it was ‘The Decision,’ whether it was a play, passing off to Donyell Marshall, whatever. People think Michael Jordan resents LeBron. To me, there’s evidence to the contrary, in that there’d be a phone call.

“So that happened. And that happened with young players that Michael liked, like somewhere between occasionally and frequently. You know, defend Russel Westbrook, Steph Curry, early on… there were certain players Michael would call up and say, “Hey, hey, stop. This is not…” or if he knew I knew the person he’d say, ‘Tell your boy he’s wrong.'”

Related: Michael Jordan, Unlike LeBron, Has No Interest In Being Called The GOAT (Because He’s The GOAT)

Check out Wilbon’s entire appearance on The Rich Eisen Show below where he also talks about why Jordan finally signed off on The Last Dance, Wilbon having to apolgize to Isiah Thomas, and more about the ESPN documentary on the 1997-98 Chicago Bulls, which he covered for the Post…