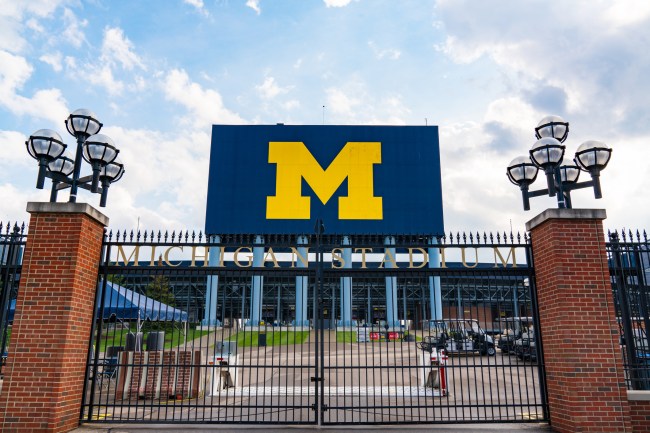 Keep the Michigan Wolverines players in your thoughts and prayers, my dudes. Their annual international trip in the Spring might be the #1 reason to go Ann Arbor and play football for Jim Harbaugh.

The trip abroad each Spring is almost a certainty, unlike ever beating Ohio State under Harbaugh, and for recruits who have never been to another country that can sound like a pretty badass perk. In the past three years, the Michigan Wolverines football team has traveled to Italy, France, and South Africa. This year, they’re staying put because of coronavirus fears.

According to reports, the Michigan Football team will not be taking their annual international trip this Spring as the highly contagious coronavirus (COVID-19) respirator illness spreads like wildfire across the planet. Instead, they’re looking into staying around Ann Arbor where the players will do community service. It’s unclear where they were going to go this year so I’ll just throw out Bora Bora as a destination. So, instead of the crystal clear sapphire waters of Bora Bora (or any other incredible location) they’ll be sticking around Ann Arbor to community service.

Michigan’s MLive has the story:

A spokesman for the team, Dave Ablauf, confirmed the decision on Monday, telling MLive the program has instead set it sights locally.

“The football team will not be taking an international trip this spring due to health concerns around the world, most notably coronavirus,” Abaluf wrote in a text message. “(We’re) looking at doing some community service in the Ann Arbor area.”

Ablauf said no destination was decided on before the decision was made.“No plans had been finalized, but quite a few ideas were discussed,” he wrote.

Last month, Michigan head coach Jim Harbaugh confirmed as much, telling reporters in Lansing that he tasked program administrators with coming up with a foreign locale for this year’s trip. The Wolverines traveled to South Africa in 2019, France in 2018 and Italy in 2017, in what had become a yearly tradition privately funded by Michigan alums.

“I told them to surprise me,” Harbaugh said in January. “The first trips … it was like a one-man band. I was doing it all. And it was all time consuming.” (via)

As for the coronavirus cares, I get it. I have been fully infected by all of the coronavirus news. I spend like 90 minutes every night catching up on coronavirus updates before falling asleep scared shitless. I’m like 24 hours away from going to the grocery store and stocking up on a doomsday prep kit. China’s trying to get out in front of this now and saying the crisis has peaked but we have absolutely no reason to believe them when they kept the full severity of this under lock and key until it was too late.

There are massive outbreaks in South Korea and Italy, and it’s spreading. I’m confident that I’d survive the sickness since it’s mostly 80+ year old people who die from this illness but what about my 11-month-old son? The thought of him battling a serious illness like this has me scared shitless in the past few weeks.

For the latest coronavirus updates here on Brobible you can CLICK HERE to check out all of the work my colleague Paul has been doing.