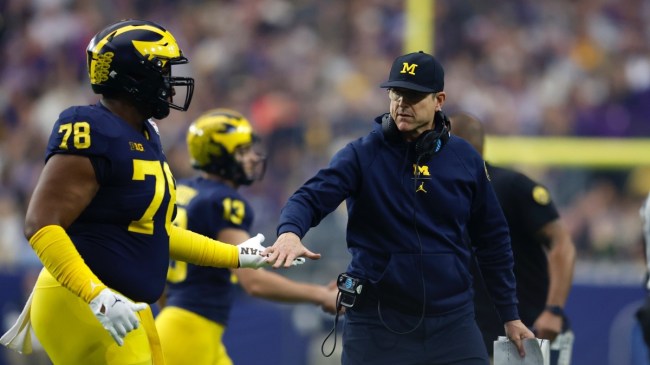 It was an excellent season for the Michigan Wolverines. The team started 13-0 for the first time in the program’s illustrious history en route to another Big Ten title and playoff experience.

It ended poorly, though, as the team played terribly in a loss to outmatched TCU in the College Football Playoff. Still, the future is bright in Ann Arbor.

Or is it? It seems like one scandal after another the last six weeks for Jim Harbaugh’s Michigan. They saw the arrest of star defensive tackle Mazi Smith come out before the Big Ten title game. And, news broke of Michigan having allegedly committed NCAA violations. What’s more, on Tuesday, it was revealed that police had searched the office and house of Michigan co-offensive coordinator Tom Weiss.

Now, more details have come out about Michigan’s situation with the NCAA.

Negotiations between Michigan and NCAA have broken down, sources told Yahoo Sports. NCAA is demanding Jim Harbaugh admit he lied to them. Harbaugh won't, saying Level II violations occurred but that he didn't recall when initially questioned. So now what? https://t.co/1A8znMvszX

Here are some more details, courtesy of the article.

According to sources, Harbaugh has acknowledged his program committed four Level II violations, as the NCAA initially alleged. He has further apologized to the university that they occurred. However, he has refused to sign any document or publicly state that he was ever untruthful with the enforcement staff.

The 59-year-old has maintained he didn’t recall the events when first speaking with investigators but that he was never purposefully dishonest.

The NCAA delivered a draft of a notice of allegations earlier this month citing the four Level II violations. They include meeting with two recruits during a COVID-19 dead period, texting a recruit outside of an allowable time period, having analysts perform on-field coaching duties during practice and having coaches watching players work out via Zoom, according to sources.