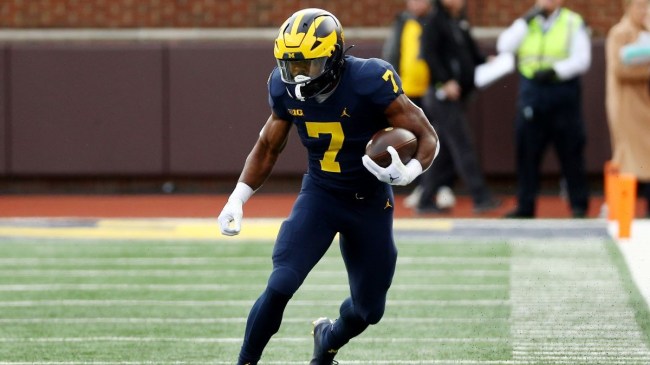 Among the numerous issues caused by Kanye West making virulently anti-semitic comments, perhaps the largest issue is that West still has a ton of influence.

Despite West showing time and again that he’s completely lost his mind and that he lacks any principles, people still seem to listen to him and take his words as gospel.

Edwards was a five-star recruit in the class of 2021 according to 247Sports. He saw limited action as a freshman, sitting behind star running back Hassan Haskins and current Heisman Trophy candidate Blake Corum. But 2022 has been a bit more fruitful for the Michigan Native. The Wolverines are 7-0 and ranked No. 4 in the country in the AP Top 25. Edwards, meanwhile, has carried the ball 43 times for 307 yards and four touchdowns in a rotation with Corum.

But now it appears he could face some sort of discipline after retweeting a clearly anti-semitic tweet on Wednesday night.

this is not okay and donovan edwards needs to learn that it’s not okay pic.twitter.com/IQeOHwwTM1

The retweet was a glitch. I speak for myself. I know what’s in my heart. I am unequivocally against racism, exploitation & oppression in all forms, including stereotyping and trafficking in hate. I have nothing but love for others & I never judge anyone based on race or religion.

College football fans were understandably skeptical of his claims.

you have to press multiple buttons in order to retweet something. it wasn’t a glitch.

bro i absolutely HATE when my twitter glitches and RTs things of poor taste on my behalf. silly twitter

Neither Michigan nor coach Jim Harbaugh have offered a statement on the tweet as of the time of writing. But the Wolverines have a rivalry game with Michigan State on Saturday and the world will be watching to see if Edwards faces any sort of punishment.

Unfortunately, Edwards is far from the first athlete to share anti-semitic propaganda. Eagles wide receiver Desean Jackson dealt with similar backlash after a post parroting Hitler in 2020 and plenty of others have had similar posts. But you hope the young Wolverines’ running back will actually learn from the moment.