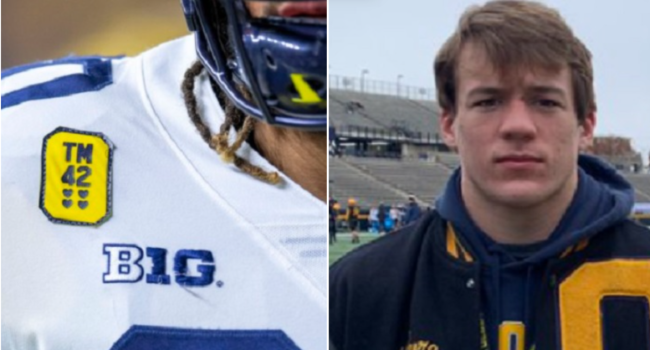 Tate Myre, the high school football player who died trying to stop a school shooter in Oxford, got the ultimate honor from the Michigan Wolverines during their Big 10 title game against Iowa.

On Saturday night, Michigan wore ‘TM42’ patches on their uniforms in honor of Myre, who wore 42 as his jersey number when he played running back for Oxford high school.

We are proud to represent the state of Michigan and all of its communities. #OxfordStrong is #MichiganStrong pic.twitter.com/H7IoGtU7MI

Myre’s parents made their way to Lucas Oil Stadium to join in a ceremony honoring their son and the other students who lost their lives in the Oxford school shooting.

Wow, the family of Oxford High School shooting victim Tate Myre were at midfield for the coin toss and are serving as honorary captains for Michigan.

Michigan ended up scoring 42 points against Iowa in their Big 10 championship win and they immediately noticed the importance of the score total.