Michigan’s Blake Corum Fires Back At Ohio State’s C.J. Stroud And His Excuses 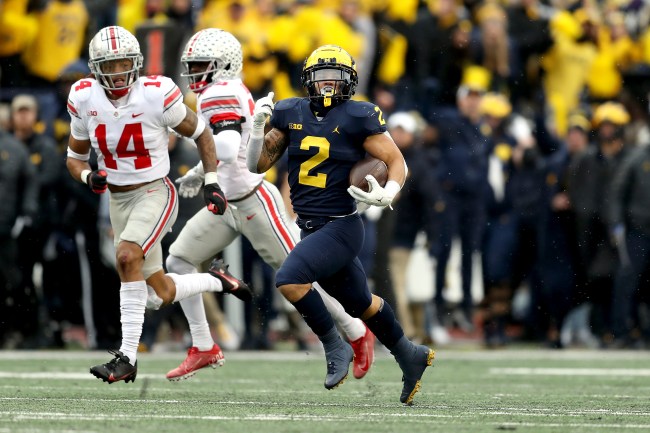 Well this has escalated quickly. Just yesterday, C.J. Stroud told the world he still believed Ohio State was better than both of the teams that beat them.

Earlier today, Stroud took it a step a further and presented his excuse for Ohio State’s loss to Michigan immediately after saying he didn’t want to make excuses. Now, Michigan running back Blake Corum has fired back at Stroud’s excuse for the Buckeyes losing to the Wolverines.

Excuses are tools of incompetence used to build bridges to nowhere and monuments of nothingness, and those who use them seldom specialize in anything else. Go Blue

There appear to be some in the Twitterverse that are taking issue with the Tweet, but if anybody has the right to talk some smack right now, it’s Michigan’s running backs. Corum only needed 6 carries to singlehandedly out-gain Ohio State’s rushing attack.

The aftermath of this game just continues to get more and more entertaining. At first, it was just Michigan’s coaching staff taking shots at Ohio State following the win. Now the players getting involved will continue to make the buildup to next year’s matchup more interesting.

This is part of what makes college rivalries great. No lines have been crossed here. It’s just one rival calling out another for making an excuse as to why they lost the rivalry game.

It wasn’t even the worst excuse. I’m sure Ohio State players catching the flu had some impact on their performance, but it’s not an excuse that needed to be put out there.

All I know right now is that we should all be looking forward to Thanksgiving week 2022. There are sure to be fireworks before, during, and after the next meeting between these teams.