Miesha Tate Returning To UFC After Four Years Away, Thinks She Can Take Title From Nunes 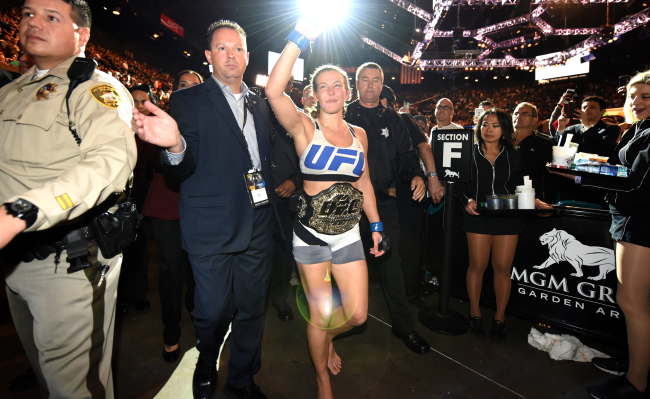 Former UFC women’s bantamweight champion Miesha Tate is making a comeback after four years away from the game and is gunning for a title.

Following an emotional loss to Raquel Pennington at UFC 205 on November 12, 2016 Tate told the MMA world, “It’s not my time, I had a lot more to give but I had to pull it out of myself. I love this sport, thank you but this is it for me.”

On Wednesday, ESPN revealed that the 34-year-old former Strikeforce women’s bantamweight champion will be making her return to the octagon on July 17 versus Marion Reneau (9-7-1).

Tate (18-7) told ESPN via text message, “My heart is full of passion, the fire has been lit! The sport has been calling for me, it’s time I answer.”

Reneau, who started out her MMA career 9-3-1, has lost her last four fights and says the contest against Tate will serve as her retirement bout.

A location has not yet been announced for the fight, nor whether it will be a pay-per-view event or just a regular UFC Fight Night card.

Tate won her UFC championship in 2016 with a submission of Holly Holm at UFC 196, but lost it in her next battle, a fight with current champion of the UFC women’s bantamweight and featherweight divisions Amanda Nunes at UFC 200, getting choked out in the first round.

“I’m so excited, I really am. There is a fire that has been lit,” Tate said Wednesday on SiriusXM. “My heart is completely full of passion. I feel like I’m totally reinvigorated. When you know, you know, and I just know. I’ve always been that person to lead with my heart and do what I feel like my calling is in life and it’s never steered me wrong. I’ve been a person that can change direction very quickly and not be afraid to do it. I dive right in if I feel like it’s right and that’s what I’m here to do.

Tate, who has had two children while away from the sport, moved to Singapore to work as a Vice President for ONE Championship. Due to the pandemic, she has now moved back to the States and been training with Xtreme Couture.

“It was what the UFC said was available and I thought, ‘That’s fine with me,’” Tate explained. “It’s been four years since I’ve fought. I think that Marion Reneau, she’s solid in every area. She has that triangle choke of Sara McMann. She’s dangerous from the bottom, she can strike well and it’s her retirement fight. So I guess when they asked her about it, she was very excited…”

Tate says she is very serious about this comeback and has signed a six-fight contract with the UFC.

“I’ve got two years that I know for sure I want to dedicate to this sport,” Tate said. “But look, anything can happen off of one fight. I’ll be honest, I really don’t know exactly what to expect. That’s what’s so exciting for me… But I can tell you, for the next two years, that’s my plan, to be heavily involved in the sport. Obviously, I want to become a champion again…