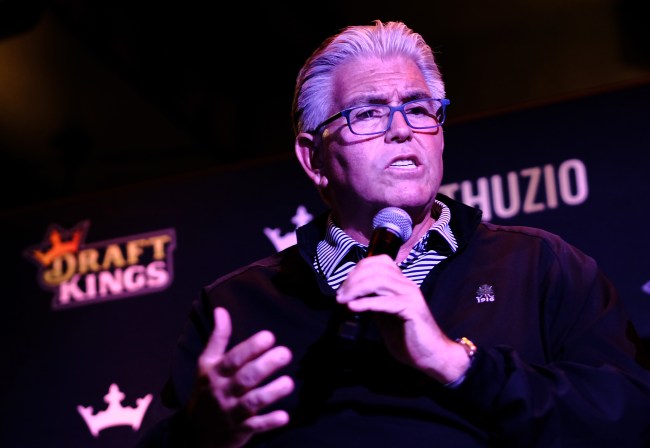 Mike Francesa is as outspoken as they come, which, you know, is the sole reason why he’s had his own sports talk radio show for over two decades. And, while he gets paid to have an opinion on different topics — which aren’t always the hottest takes — one guy he doesn’t think deserves the right to speak his mind is Cleveland Browns quarterback Baker Mayfield.

As most of us know, Mayfield got hella criticism the other day when, in an interview with GQ magazine, he completely trashed the New York Giants’ selection of fellow signal-caller Daniel Jones, with whom the franchise selected No. 6 overall in this year’s draft. As a reminder, here’s what Mayfield had to say about Jones.

Baker Mayfield has some thoughts on Daniel Jones 👀 pic.twitter.com/IVxcu7cwxf

Naturally, like any smart person who gets negative reactions from something, Baker completely backpedaled on his comments, claiming he was taken out of context and that he didn’t mean to crap all over the rookie. Here’s a quick look at Mayfield’s apology and explanation.

That might have been an attempt for Baker Mayfield to save face, but, unfortunately, Mike Francesa isn’t buying it. And, if you need further proof that the sports talk legend didn’t find Mayfield’s comments about Jones acceptable, just look at the scathing rant he went on about the Browns quarterback.

“As far as Mayfield, hey, why would you be worried about anything Mayfield says? The guy doesn’t have a brain in his head,” the host said. “He never has. Listen to him, you hear some of the things he says? Not a bad quarterback, not a bad player, but when you listen to him talk you’d rather just say ‘Hey, you know what, don’t talk, just go play,’ because he doesn’t have a brain in his head. He never has.”

Yep, in true fashion, Mike Francesa just went fully in on Baker Mayfield, legitimately calling him “brainless” in one of the more epic rants he’s ever had — which is saying something. Something tells me Baker will either a) respond in some way, or b) use Francesca as motivation, which he often does with people who try calling him out.

As for Daniel Jones, he’s tried to downplay the whole thing, hoping to avoid getting into a back and forth with Mayfield. Still, it has to feel kind of crappy to know that a fellow quarterback in the league just completely took a steaming pile of poo on you before your career even begins. Maybe Jones will use it as motivation, though, which Giants fans should hope he does.