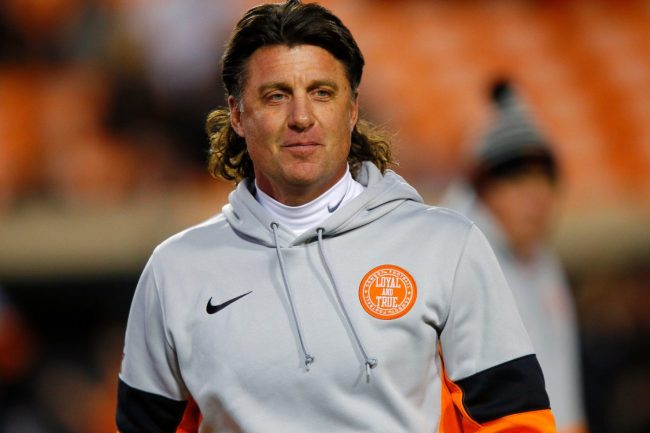 Bedlam is dead according to Mike Gundy, who spoke on the negative side of conference realignment this week. At the Big XII media day event, Gundy was heard talking about his rival Oklahoma, who’s soon to be off to the SEC with fellow conference member Texas.

The move, as Gundy puts it, gives the annual rivalry between the Cowboys and Sooners just “a year or two” more before Oklahoma’s imminent departure. He believes that one of college football’s great rivalries will die because of OU’s decision.

“Bedlam’s history. Bedlam’s not going to be Bedlam after they leave the conference. I don’t make that decision. I’m just telling you in my opinion, I think it’s history.”

He doubled down on the opinion Thursday, taking another moment to talk about conference realignment and the state of the OSU-OU rivalry moving forward.

When asked if there was a possibility of Bedlam being continued once the Sooners head to the SEC, Gundy didn’t seem optimistic.

“I don’t think it’s feasible… If we’re going to play nine conference games, and we’re scheduled out through ’32 or ’33, every year we have a Power 5 opponent, that would be adding another Power 5 game. That would be 11 games at that level. Can the players withstand it? I don’t know… I just don’t think that it’s feasible based on all of the moving parts that have to happen for that to take place.”

Gundy goes on to say that since the Cowboys have already scheduled out their non-conference opponents, they’d be required to buy out of contract agreements in order to play the Sooners. He doesn’t think that it’s going to happen.

Oklahoma fans are saying that he doesn’t want it to.

Sooner fans reacted to Mike Gundy’s comments on the Bedlam rivalry. Many don’t think he wants the rivalry to continue.

Why take the L if you don't have to

He can only pray… pic.twitter.com/kJO04nS8v4

I’d get out to 😂😂😂Boomer pic.twitter.com/abUdbmdAG3

Many fans note the rivalries between many SEC and ACC schools that still play yearly.

Why can’t they do what Georgia/Georgia Tech do? Every year it’s a rivalry/no conference game.

According to Sports-Reference, the Sooners lead the all-time series with the Cowboys 82-19-7. Since Gundy has been in Stillwater, Oklahoma State is 3-14 against OU, though they did win the last matchup.

Maybe there’s something to that line of thinking…