Mike Gundy’s New Hairdo Raises A Question For The Ages: What Makes A Mullet A Mullet? 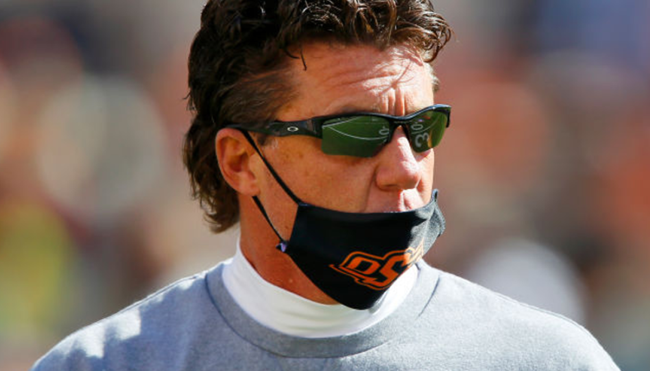 As my good friend Matt noted when Oklahoma State’s Mike Gundy repeatedly found himself making headlines for all of the wrong reasons last year, anyone who was shocked by his questionable stance on making unpaid college students play during a pandemic and his preferred media outlets obviously hadn’t been paying too much attention.

After all, we’re talking about a man who was raised in Oklahoma before playing college football at the alma mater where he’s served as the head coach since 2005. Sure, he may have spent a few years honing his craft at Baylor and Maryland, but the dude has always been the walking embodiment of a camouflage bucket of beef jerky purchased at a Bass Pro Shop.

Gundy’s signature mullet has played an important role in that mystique, and his hairdo is something he takes an extreme amount of pride in. If you need proof, you don’t need to look any further than the fiery response he issued to a reporter who drew the coach’s ire after referencing a satirical story about T. Boone Pickens leaving him a $30 gift card in his will to get it cut.

However, we were treated to a major development on Thursday when Gundy rolled into Big 12 Media Day sporting a still majestic but noticeably trimmed mane.

As a result, I found myself staring at pictures of Mike Gundy for much longer than I care to admit after finding myself grappling with an eternal question I never knew I needed answered: what exactly makes a mullet a mullet?

As we all know, the Oxford English Dictionary defines “mullet” as “a hairstyle that is business in the front and party in the back.” While that may have once applied to Gundy’s hairdo, his current look is less “house party where someone tries to jump into a pool from a third-story balcony” and more “small gathering of automotive sales reps talking shop over a few bottles of moderately priced scotch.”

The BroBible crew seems to be split over whether or not Gundy’s current look qualifies as a mullet. I don’t really have any credentials I can pull out to assert myself as an authority on the matter, but I would argue the new cut doesn’t make the cut. This is admittedly more of a Potter Stewartesque “I know it when I see it” ruling than anything else, but if I had to point to a specific reason, I’d say it lacks the required length; the fact that we can still see the collar on his dress shirt means “business” has clearly taken precedent here.

With that said, it seems like Gundy is still working with enough lettuce to have his Official Mullet™ status restored by the time the college football season kicks off. I guess we’ll have to wait and see if this is a temporary pivot or if he’s fully embracing the “Florida Retiree With A Collection Of Vintage Cars And A Huge Wine Cellar Who Is Incredibly Cagey About How He Made His Money” aesthetic.