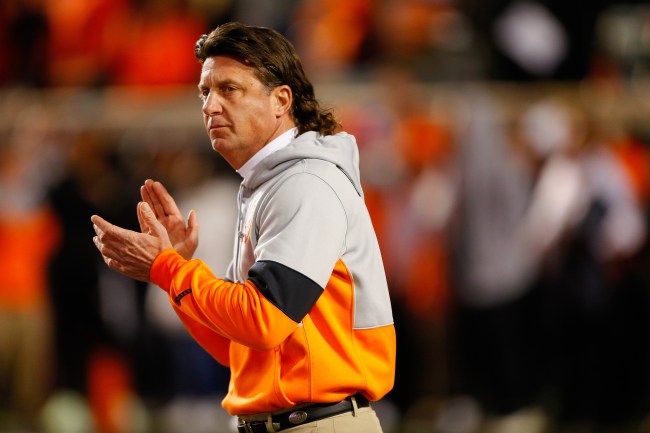 Oklahoma State University head football coach Mike Gundy spoke to reporters in a teleconference on Tuesday afternoon and made some eyeopening remarks regarding being able to resume practices on May 1st during the current health crisis in the country.

Gundy is currently advocating for players to resume practice on May 1st because he feels that players are equipped to fight the virus and that they need to generate revenue for the state of Oklahoma.

“We get people that get the flu during the season, we quarantine them, we treat them, we make sure they’re healthy, we bring ’em back,” Gundy said. “It would be the same thing here, but at some point, we’ve got to go back to work. We’ve got to get these guys back in here. … From what I read, the healthy people can fight this, the antibodies make it better. They’re doing some blood transplants now with the people that have already gotten the disease, that have gotten over it that have the antibodies that can fight it. There’s a lot of people who can figure this out. May 1’s our goal. Don’t know if it will happen. Players will come in after that.”

Mike Gundy has said he hopes to have players back by May 1st at #OKState. He says he's trying to "find answers and solutions based on what situation we're in right now." Here's his comments which some consider controversial. pic.twitter.com/kluGogKj4H

Gundy got immediately crushed for his comments about risking his players’ health to generate revenue.

Also Mike Gundy: “We need these 18-22 year olds to fight COVID-19 and play a sport because our state needs all the money from their unpaid labor.” pic.twitter.com/Ht75caWRf2

Mike Gundy is willing to risk the lives of his unpaid talent in order to bring money to Oklahoma. pic.twitter.com/rjNclzh1BI

Mike Gundy on May 1st to his players #COVID19 #OSU @CoachGundy pic.twitter.com/gbFouTmUoF

congrats to anyone that had mike gundy +250 as the first college football coach to say college kids should be fine and could shake off the virus so let's play footbaw. muschamp +150 ticket holders are despondent