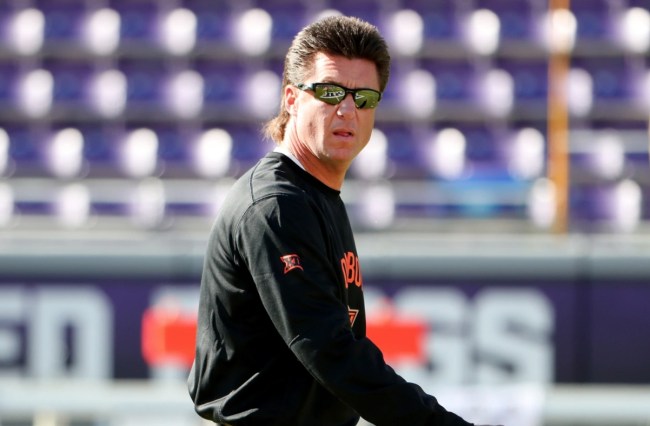 Oklahoma State head coach Mike Gundy has been in some rather hot water over the past few days following a picture emerging on social media of him wearing a One America News (OAN) shirt. Chuba Hubbard, the Cowboys’ best player and arguably the best running back in the country, took notice and called out his coach for showing support to the network.

Hubbard initially tweeted that he wouldn’t be ‘doing anything with Oklahoma State until things change,’ but shortly thereafter both he and Gundy appeared in a video together in which Gundy apologized for wearing the shirt in an attempt to straighten things out.

The apology certainly didn’t quiet the criticism and conversations about Gundy with Paul Finebaum even claiming that Oklahoma State should fire him.

On Wednesday, Gundy elected to address the situation with ESPN as the network released interviews with both Hubbard and himself. The 52-year-old didn’t hold back in putting himself on blast calling himself a ‘dumbass.’

“I didn’t know some of the stances they [OAN] had taken,” Gundy explained to ESPN. “I didn’t know that, but you look at it and say, ‘ok, I was a dumbass.’  I put the shirt on, not knowing enough about the shirt.”

Gundy posted yet another apology the day prior to the ESPN interviews being released via Twitter.

While he has perhaps cooled off the t-shirt controversy, Gundy has been tossed into more extremely hot water again thanks to former NFL player Alfred Williams claiming that he hurled the n-word around back when he was the Cowboys quarterback.