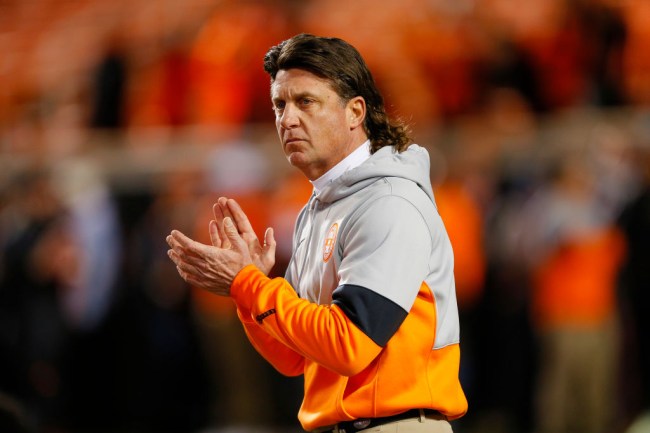 I’ll admit that I didn’t know that much about Oklahoma State head football coach Mike Gundy prior to this offseason aside from the fact that he seems like the kind of guy who is always wearing a ghillie suit underneath his clothes in the event he ever finds himself in the position to take part in an impromptu duck hunt.

Of course, I was intimately familiar with the time he channeled the Will Ferrell character who wanted everyone to know he drives a Dodge Stratus, but that was really the extent of my knowledge.

However, the world has gotten a bit more acquainted with Gundy’s worldview in recent months, as the coach caused plenty of people to tilt their head, squint their eye, and utter a “Da fuck?” in April when he told reporters it was imperative his players get back to campus as soon as possible in the midst of a pandemic so they could start generating revenue for the state of Oklahoma.

During that same call, Gundy revealed he’d also recently discovered One America News Network, which he said he enjoyed because “they just report the news” despite that being decidedly not the case.

It appears someone at the outlet thanked Gundy for being a fan by sending some swag his way and he recently decided to rock a t-shirt with the network’s logo on it on a fishing trip. This didn’t sit very well with Oklahoma State running back Chuba Hubbard, who wasn’t thrilled his coach was repping the channel that tried to paint the 75-year-old man who had his skull fractured after being shoved to the ground by police in Buffalo while protesting as the bad guy in the situation.

After meeting with the team, Gundy issued a mea culpa while standing alongside the star player, and while it appears the team is trying to move on, a number of people in the college football world seem to think it’s time for the school to do the same and find someone else to head the program.

Mike Gundy and Chuba Hubbard recorded a message together after Hubbard called for change at Oklahoma State.

Now, he’s found himself cannonballing back into hot water yet again thanks to former NFL player Alfred Williams, who recently spoke with Shannon Sharpe in order to bring some attention to an incident that transpired during Gundy’s time as the starting quarterback on the team he now helms (at least as of this writing).

.@ShannonSharpe discusses his call with Alfred Williams, who was reportedly on the receiving end of a racial comment made by Mike Gundy when they were both college players in 1989 pic.twitter.com/EFIPxVrjdi

Sharpe says Williams told him about the time he faced off against Gundy when he was playing at the University of Colorado in 1989. The linebacker recalled sacking Gundy before the frustrated quarterback hurled the n-word at him and said some of his black teammates received the same treatment over the course of the game.

These aren’t technically new allegations, as they were made public after the game and Gundy spoke to the press shortly after they surfaced to deny them.

Here's the story in the St. Louis Post-Dispatch on Tuesday Nov. 14, 1989. pic.twitter.com/RKSZib4IkT

Found Mike Gundy reacting to what's discussed below in our archives. This interview was from two days after that 1989 #OKState – Colorado game. https://t.co/B2tPmvzgYt pic.twitter.com/C1xbJcJlna

Williams elaborated on the issue on his radio show on Wednesday, saying:

“I couldn’t believe it. There’s no walking that back. This story’s been out there for 31 years.”

Williams says he doesn’t think Gundy should be fired but he does want an apology. However, I don’t think it’s a stretch to assume Gundy might be out of a job if he admits he was at fault. Regardless, you have to wonder how many more Gundy-induced headaches the school will be willing to deal with before deciding to look into other options.