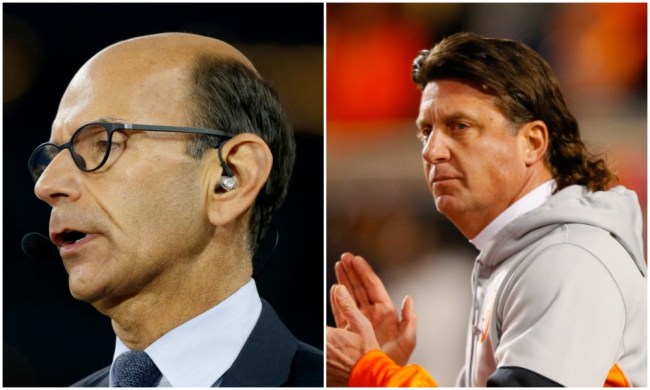 On Monday, Mike Gundy found himself in a social media onslaught after a photo of him surfaced of him wearing a One America News (OAN) t-shirt. Oklahoma State’s best player, and maybe the best running back in the nation, Chuba Hubbard, didn’t appreciate his head coach wearing the t-shirt.

Hubbard reacted to the photo by tweeting “I will not stand for this.. This is completely insensitive to everything going on in society, and it’s unacceptable. I will not be doing anything with Oklahoma State until things change.” Shortly thereafter, Gundy and Hubbard teamed up to share a rather awkward apology video.

Paul Finebaum isn’t buying the apology nor does he think that any change will come to the OSU program if Gundy is still around. During an appearance on ‘Get Up’ on Tuesday morning, Finebaum stated why he believes that the school should fire Gundy.

“I thought the wrong person apologized. Chuba (Hubbard) is just expressing his frustration with his head coach in the middle of a national, international crisis, wearing a t-shirt of a network that I must admit I’ve never seen,” Finebaum explained via 247 Sports. “But I’ve read enough about it. And a commentator of that network recently said that ‘black lives matter’ is a farce. So I can understand the frustration of the players. What I can’t understand is why Mike Gundy is allowed to continue to coach at Oklahoma State. This is not his first rodeo. It’s not the first time that he has embarrassed or humiliated the university. I think the sooner Oklahoma State gets rid of Mike Gundy, the better it’s going to be for that school and especially the players who go out every Saturday and give their blood, sweat and tears for that university.

I have watched Mike Gundy over the years and the only meaningful thing he has contributed over his 15 years is the “I’m the Man! I’m 40!” that went viral years ago.”

Gundy has been the head coach in Stillwater since 2005 and boasts a 129-64 record while leading the Cowboys to six 10-win seasons over the years.