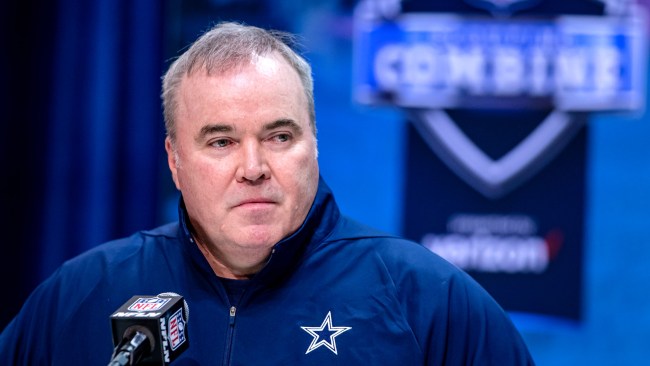 The Dallas Cowboys… always one step ahead of the rest of the NFL. Right? For example, Sunday night as the team held a televised practice from AT&T Stadium Cowboys new head coach Mike McCarthy had all of the players on the team wearing numberless jerseys.

You know, so opposing teams that happened to be watching the local Dallas station that was airing the practice would have no idea that players like Dak Prescott, Ezekiel Elliott, Amari Cooper, and CeeDee Lamb will be starting once games commence.

Even smarter, according to ProFootballTalk.com, “The local station broadcasting the practice is showing no live plays. Cowboys fans watching at home are complaining on social media of seeing only players on the sideline.”

According to Jerry Jones, their reasoning for no numbers on the jerseys was because they don’t want other teams knowing about the borderline players the team wants to keep on their practice squad.

Cowboys owner Jerry Jones says on team broadcast the club is practicing today with no numbers, no names on jerseys because Dallas wants to avoid other 31 teams from claiming a player it cuts. Hopes to retain coveted talent, signing those players to practice squad.

Of course, Cowboys fans were not happy, which is becoming pretty much the norm these days.

You said you would be "airing a live practice"! You totally misrepresented what the show was going to be, and you pissed off a bunch of loyal fans hungry for Cowboys football!

No action is shown so why say that it’s streaming or on Tv why do that to fans. Just have your practice and we can wait until the season starts makes no sense what a waste of time if we can’t see what we have as fans.

@DallasCowboys Don’t treat your fans like this, especially this year! If you say your going to televise a live practice do it. If you said you were going to have a 3 hour podcast we still would have watched but without the frustration. Say what you mean, & mean what you say.

In other odd Dallas Cowboys news, Cowboys coach Mike McCarthy is “not a fan” of piping in fake crowd noise for games without fans – something it sounds like he won’t have to worry about during Cowboys home games this season.

“It’s league mandated,” said McCarthy. “They’re trying to pull all the football criteria together for the regular-season games. It seems like they’re not settled on a decibel level – a level of noise – so I was kind of waiting to see exactly how loud it was going to be, particularly the crowd noise that’s going to be the same in every stadium. So that’s a pretty accurate example of what to expect.”

Despite his misgivings, the Cowboys practice WAS held with fake crowd noise pipe in because their first game is against the Rams and will be be held at an empty SoFi Stadium in Los Angeles.