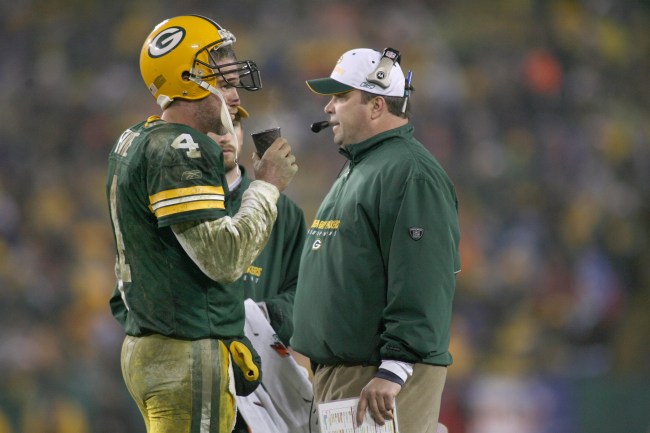 Brett Favre was one of the best quarterbacks to ever do it, with the former Green Bay Packers legend winning three league MVPs, winning a Super Bowl, setting a bunch of passing records and, ultimately, finding his way to the Pro Football Hall of Fame. While Favre accomplished a lot of that with Mike Holmgren as his head coach, for two seasons of his Packers career, the gunslinger was under the watchful eye of Mike McCarthy — who took over as Green Bay’s head coach in 2006.

Although McCarthy couldn’t get a Super Bowl title with Brett Favre as his quarterback, he did win one with Aaron Rodgers under center, while also compiling a career head coaching record of 125-77-2 during 13 seasons with the Packers. With that success, it made sense that Jerry Jones and the Dallas Cowboys wanted to hire McCarthy to replace the recently fired Jason Garrett — although many media members and fans aren’t so thrilled with the move.

That brings us back to Brett Favre, who was all for the Cowboys making McCarthy the franchise’s next head coach, with the iconic quarterback giving his take as to why the relationship between the outspoken Jones and McCarthy can absolutely work.

“I don’t know Jerry other than what I see and what I hear,” Favre said on SiriusXM NFL Radio, via Jon Machota of the Dallas Morning News. “Obviously, he’s the owner, and everything starts and stops with him. Mike’s a smart guy. He knows that, and he knows that maybe at times Jerry will interfere or say things that you don’t necessarily agree with or don’t like. But it is what it is. I’ll say this: Mike is one of those guys from Pittsburgh. He’s hard-nosed. He’s tough. He is an aggressive personality. If there’s anyone out there presently that can handle that, it’s Mike. I believe that wholeheartedly.”

Given the dysfunction that occurred with the Packers back when the team had both Brett Favre and Aaron Rodgers, it’s safe to say that Mike McCarthy is battled tested when it comes to handling pretty much anything. So, while having Jerry Jones as a boss is demanding, Favre has no doubt that his former head coach is more than up for the pressure.