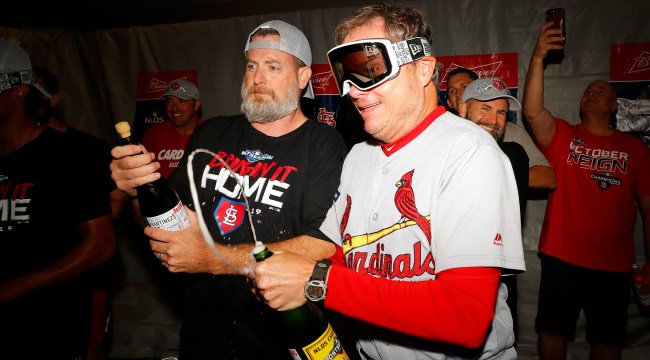 Back when I played soccer in college (Rutgers U baby stand up!), I used to take pride in the fact that I’d give the pregame hype-up speech.

While I was far from the team’s best player, I was certainly it’s loudest and most outspoken, therefore bequeathing me with the duties of saying some hype shit in the huddle before the game starts.

You see, while it was the coaches job of getting the team prepared to play, it was my job to get the squad prepared to scratch, claw, and fight — that is the purpose of the pregame speech.

And when it comes to sports, there’s only one thing more blood-pumping than a well-delivered pregame speech… and that’s an epic postgame speech.

Likely given after a massive victory, a quality postgame speech not only get the locker room jacked up about the present but sets the tone for the future. Unfortunately for me and my teammates, I never got to give a postgame speech as A) that was still the coaches job and B) we never had any victories truly worth of one.

But, buttttt… if I did give one, I can only hope that it would be half as good as Cardinals’ manager Mike Shildt, as his rallying cry to his squad following their Game 5 domination of the Atlanta Braves has me ready to run through a brick wall, and I don’t even like the Cardinals and baseball is only my third favorite sport.

“The [Braves] started some shit. We finished the shit. And that’s how we roll. No one fucks with us ever. Now, I don’t give a fuck who we play. We’re gonna fuck them up. We’re gonna take it right to them the whole fucking way. We’re gonna kick their fucking ass.” pic.twitter.com/2J7jyJc60O

The Cardinals, who beat the living shit out out of the Braves by a score of 13-1 in Game 5, will kick off their series against Washington Nationals — who advanced to the NLCS in their own epic fashion — on Friday.