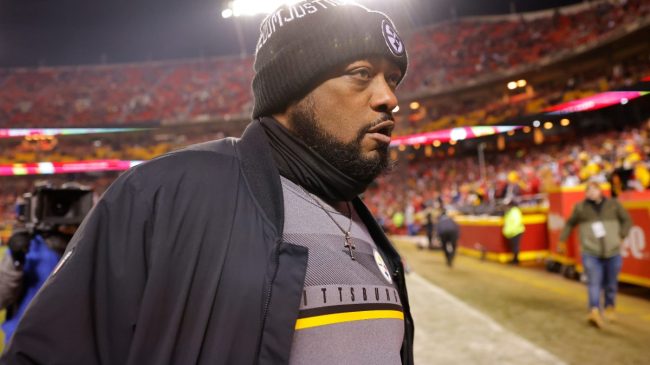 In the 2013 NFL season, there was an incident involving Steelers head coach Mike Tomlin during the team’s rivalry matchup with Baltimore.

That moment saw the coach step onto the field and in the way of oncoming kick returner Jacoby Jones. Jones, at the time, was racing down the field in an attempt to score a touchdown. Tomlin’s misstep prevented a score, though.

Jones was tackled before reaching the endzone as he had to make a slight cut back towards the middle of the field. On Wednesday, Tomlin revealed his memory of the play.

The Pittsburgh head coach appeared on the Pivot podcast to talk a little football ahead of the 2022 season. The play with Jones was brought up.

Tomlin says that he was watching the play unfold on the jumbotron. What he didn’t take into account was the fact that the videoboard image is flipped.

So when Tomlin saw Jones racing down the sideline, he thought it was the Ravens side of the field. He was wrong.

“I didn’t realize I was in danger, man, until I saw myself on the Jumbotron.”

While Tomlin gives a funny recount of story, many believe it’s revisionist history.

I respect that guy but he’s full of it here. He knows damn well he was guilty that night

This might be the clearest view of all. It looks like Mike Tomlin is watching Jones over his shoulder. He smirks after the play is through.

Ain’t no Jumbotron in his line of sight. Dirty move coach pic.twitter.com/LLMfjP5UX9

Whether you believe him or not, Tomlin did end up paying for the interference. He was fined by the NFL.

The Ravens would go on to win the game, so luckily, the play didn’t affect the outcome.