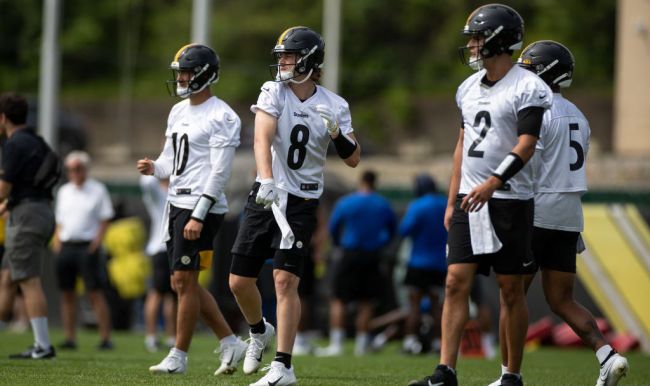 For the first time in a long, long time, the Pittsburgh Steelers are entering a fresh NFL season without future Hall of Famer Big Ben Roethlisberger as their starting quarterback.

As a result, the iconic NFL franchise is now heading into the 2022 season facing the prospect of having either former Chicago Bears castoff Mitch Trubisky, Mason Rudolph, or rookie Kenny Pickett as the team’s starting signal-caller.

Naturally, the team’s QB position is the biggest question on fans’ minds as training camp continues to roll on, meaning head coach Mike Tomlin is going to have to field tons of questions about the ongoing battle for the job.

His latest update from earlier this week provides an excellent example of how coaches can so often say a lot without saying anything at all.

“They’re making it difficult for us. It’s tough to manage three capable guys, but they’re forcing us to do it because they’re making the necessary plays. They’re anticipating, the timing has been good, [and] the accuracy has been good. Mitch’s silver bullet, if you will, is his fluidity and mobility. He’s a really good athlete,” Tomlin said.

“Rudolph throws a really good deep ball. [Pickett] has been Steady Eddie. Kenny P, I don’t think you can get him in an environment where he gets flustered. We saw that at Pitt and it’s it’s been the same. It doesn’t matter what drill or what environment you put him in. He’s Steady Eddy and really cool.” [via ProFootballTalk]

The Pittsburgh Steelers will kick off their preseason this weekend when they take on the Seattle Seahawks on Saturday, August 13 at 7 p.m.

RELATED: Ben Roethlisberger Discusses The Advice He Gave Kenny Pickett About Being The Starting Quarterback For The Pittsburgh Steelers