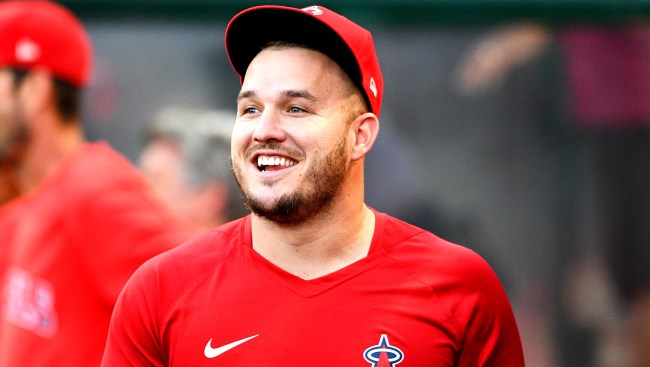 Normally, this time of year, Los Angeles Angels superstar Mike Trout would be very busy gearing up for Spring Training.

Snowing hard under that band in South Jersey !! pic.twitter.com/UImT84ELzE

So, Mike Trout obviously has a little more free time on his hands than he normally would in February.

Which also means he has time to notice things on social media.

Like this tweet from hitting coach Matt Lisle, joking about what kind of tips and suggestions would his followers have for a certain hitter in a video he posted.

Yes, that is Mike Trout in the video. And no, he needs absolutely zero help with his swing.

That didn’t stop the Twitter account for the Evansville Devils, a 17U travel baseball team out of Indiana, from offering some advice.

“Pitching machine swing,” they replied. “Works great when you’re 8, not so much against any velocity. Work with him on keeping his hands inside the line and keeping shoulders level. Balance is key.”

Three-time AL MVP Mike Trout is the only player in Major League Baseball history with 300 home runs, 200 stolen bases and a .300/.400/.500 slash line after 10 years in the Majors. He currently leads all active MLB players in career slugging percentage (.582) and OPS (1.000). And he is the first player in MLB history to hit 30 home runs, steal 45 bases, and score 125 runs in a single season. But yeah… pitching machine swing.

Naturally, many baseball fans had questions and comments.

Rumor has it the Evansville Devils passed on Rickey Henderson as their leadoff guy: “Too slow. No instincts on the basepaths. No confidence in himself.”

Fans couldn’t believe it, yet they continued to criticize Mike Trout’s swing

Undeterred, the Evansville Devils Twitter, for some reason, doubled down.

I am. That swing gives you one point of contact through the zone. Personally I'll take high average line drive hitters over a .150 avg every once in a while HR all day. Line drives turn into backspin HRSs, uppercut swings are outs

Which, of course, led to many, many more comments and questions.

Dude. You mansplained a 3 time MVP and a 9 time all star on how to hit. 🤣😂 YOU..mansplained Mike Trout. pic.twitter.com/22Mq6ikFTb

Eventually, they were made aware that it was Mike Trout in the video.

And eventually, Mike Trout himself had to respond.

I know, I know, I'm the idiot who didn't expand the video. Pretty sure next time I will, and @MikeTrout can adjust to anything thrown at him. I still stand by my philosophy for younger players though. Even if it means dying on that Twitter hill

Seriously though, that’s really not a hill worth defending.

We did, he's an amazing guy and definitely has gained a fan for life