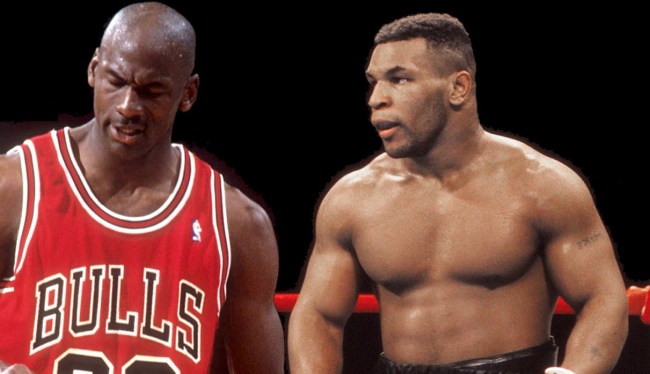 Michael Jordan may be The GOAT of basketball, but back in the late 1980s he was just trying to survive the Chicago Bulls’ “traveling cocaine circus” and win some games.

The real king of sports at that time was one Iron Mike Tyson who was at the height of his powers, sitting undefeated at 35-0 after dispatching Michael Spinks in just one minute, 31 seconds.

Jordan and Tyson, then just 22-years-old, were both reportedly at a party for Chicago Bears’ star defensive end Richard Dent following the Bulls’ game versus the Atlanta Hawks on Dec. 13, 1988 along with then Bears coach Mike Ditka, boxing promoter Don King, and Tyson’s co-manager Rory Holloway.

At that time, Tyson was going through a very messy breakup with his wife Robin Givens and was beginning to drown his sorrows in some Long Island Iced Teas when he decided to air some grievances with His Airness.

From Holloway’s book Taming The Beast: The Untold Story of Team Tyson via BoxingScene.com…

“Mike Tyson’s sitting there with his drink of choice, a Long Island Tea, and when he drinks his real feelings come out.

“I’m telling the server to water his drinks down ‘cause I see where this is going. Mike stares across the table at Michael Jordan. He says, ‘Hey man, you think I’m stupid? I know you f***ed with my b***h.’

“Jordan looks like he just seen a ghost. ‘I know you messed with her,’ Mike says. ‘You can tell me.’

“Jordan, it’s obvious he just wants to get up and run. He wants no part of this. Mike turns to Ditka. ‘Man, you think somebody scared of you, all that racist s**t you been talking?’ He says to Dent, ‘Y’all scared of this damn white man, Richard? He ain’t nobody. You gonna let him talk that way?’

“It was a circus, for real, that night. Don King trying to change the subject. Me and John trying to hold Mike down. Mike telling everyone he’s going to bust Jordan’s ass. Jordan’s dressed sharp as always and he can’t get out of there fast enough.”

Dent and Ditka have each offered differing accounts of the confrontation, but Holloway insists, “I know I’m not crazy, you don’t forget stuff like that. I had a lot of funny moments with Mike Tyson … and this was one of them. Michael Jordan was my hero.”

Jordan, when asked about the incident in subsequent years, has always reportedly declined to comment. Probably a wise move.