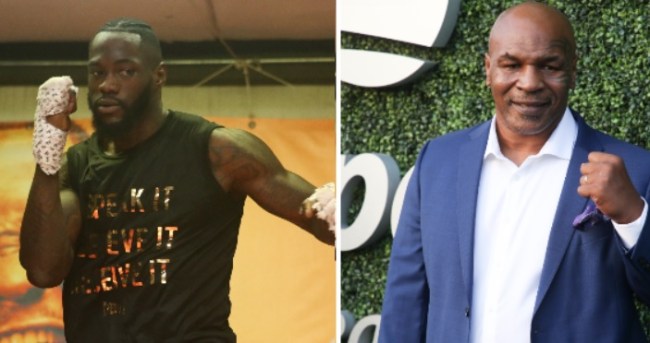 Deontay Wilder is currently the top heavyweight boxer and his confidence is sky high.

During an interview with TMZ back in November Wilder claimed that not only could he punch harder than Mike Tyson but that he could have beaten Tyson in his prime.

Me vs. Tyson in ’86, I’d kick the hell outta that guy. Listen, I’ve got to keep it real. I know people always go back to the old school or look at the new school and there’s no school where I’m not No. 1 on earth,”

Tyson was recently asked about Wilder’s claims and he took the classy approach in his response.

I don’t know (whether I’d beat him). I love the fact that he thinks that, because that’s the way I would think as well. He’s supposed to think that way, he is the heavyweight champion of the world and that’s something very special,”

As for the Wilder-Fury rematch, Tyson is pulling for Fury to win the fight.

“In the first fight I was hoping for Tyson Fury, I always pulled for him because he was named after me, that is the natural thing to do, right?

“I didn’t know if they were washed up or throwing the fights because Tyson did not look like he should be beating them.

“But he was and he was laughing at them, that made me a fan. He is so much better than what he appears to be and looks like.”