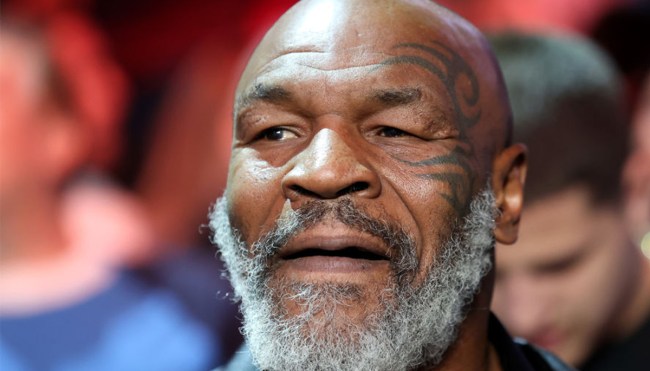 It’s difficult to imagine that anyone who is even remotely familiar with Mike Tyson would think it’s a good idea to try to get under the skin of the dominant boxer who was deservedly dubbed “The Baddest Man on the Planet” over the course of a professional career where 44 of his 50 wins came via knockout.

However, the icon (who remains a fairly formidable fighter at the age of 55) would appear to be a more popular target than you’d think.

Last year, a man in a crowd of autograph seekers arguably got off easy when he landed in jail after throwing a punch at the legend following his bout against Roy Jones Jr. However, the same can’t be said for another who got drilled with a few massive doses of karma in the form of the fists Tyson clocked him with after getting harassed aboard a flight in April.

The incident went down while the plane was sitting on the tarmac at San Francisco International Airport, where the passenger in question reportedly spend a good chunk of the boarding process pestering Tyson before the situation escalated after he threw a water bottle at the boxer (police declined to press any charges after detaining both men following the viral altercation, although his alleged assailant did recruit a law firm to explore potential legal option).

Now, Tyson has shared his side of the story for the first time, as he discussed what went down with Matt Barnes and Stephen Jackson on a recent episode of All The Smoke (the segment in question kicks off around the 20:00 mark).

“They said I ain’t gonna pick up charges! He was f—king with me, man. I took pictures with this n—a.

I shouldn’t even be taking public planes. My wife gets mad that I take public planes but what am I gonna do on the f—king plane with my friends, and what, a bodyguard and a f—king yes man?

What am I gonna do on a [private] plane? It triggers me.”

Tyson also acknowledged he has plenty of previous experience when it comes to random people attempting to incite him and cited the time he had to be stopped from confronting a fan after his infamous rematch with Evander Holyfield.