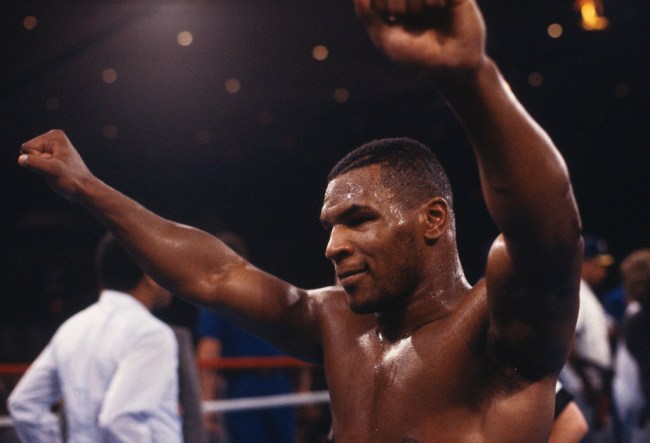 Teddy Atlas was Mike Tyson’s first real boxing trainer and started molding the future heavyweight champion when he was only 12-years-old. Atlas was only Tyson’s trainer for three years, which included highs and lows. The most talked-about moment of Teddy’s training tenure of a young Mike Tyson was the time Atlas put a gun to Tyson’s head.

Teddy Atlas was first introduced to the young boxing phenom was when Tyson was 12-years-old. The veteran trainer Atlas and legendary boxing manager Constantine “Cus” D’Amato saw the sky-high potential in Tyson, and they personally took the young boxer under their wings.

Atlas appeared on the Joe Rogan Experience in September of 2018 and discussed in-length his experience dealing with Mike Tyson since the boxer was 12-years-old. “Tyson, when I first had him, he was 190 pounds nothing but muscle, 12-years-old,” Atlas said of the young Mike Tyson. Atlas said Tyson was “mentally weak” at 12-years-old for a fighter, and had “residual stuff from his upbringing.”

“He used to hide in between abandoned building walls in Brownsville, it was a rough place. He used to hide between walls to not get picked on,” Atlas said. “And I believe when you do that, you never get outside of that wall to a certain extent. You’re always hiding in that wall for the rest of your life.”

Atlas was Tyson’s trainer when 15-year-old Tyson was boxing in the 1981 Junior Olympic Games. A video shows Teddy consoling a sobbing Mike Tyson before a boxing match against Joe Cortez, in which Tyson knocked him out nine seconds into the fight with a devastating left hook.

Teddy Atlas claims that he pulled a gun on Mike Tyson when the boxer was 15-years-old. Teddy alleges that Tyson grabbed the butt of the 11-year-old niece of Atlas and told the girl all of the sexual things he wanted to do to her.

Atlas gave an interview with Dan Le Batard on his ESPN show Highly Questionable and talked about the moment he put a gun to Tyson’s head.

“Tyson had gone after a family member who was 11-years-old, a girl, and he had been pushing the boundaries more and more and more,” Teddy said. “His restrictions or care about how he treated other people became less and less.”

“I put him out of the gym for his behavior in school. What he was doing, threatening students, and basically putting his hands on girls in the hallways,” Atlas said. “He knew how to push those parameters. He understood the streets. He understood those rules, those laws. He understood people in those ways. Under those conditions, what he could get away with it.”

“Tyson was thinking that he could get away with more and more improper behavior,” Atlas added. “It pushed it into one day, I come home, and I find out that my wife and sister-in-laws are crying because what he did to an 11-tear-old girl in my family. Took him on his word for the things he wanted to do to the 11-year-old girl, in a sexual way.”

“You will never do it again. You’ll be dead if you ever do it again. There won’t be a conversation. You won’t be seeing me. You won’t even know that there will be repercussions. You’ll just be gone. Understand that very clearly because It’s important for my family and obviously you,” Atlas threatened Tyson.

“I put the gun in his ear, and he didn’t seem like he understood it at that moment,” Teddy claims. “So I pulled it out of his ear and pulled the trigger,” Atlas claims. “Missing him on purpose, and he understood it after that. It wasn’t a threat. It was to make it clear that I wouldn’t have to be in that position again, and either was he.”

In a December 2019 interview with London Real, Teddy Atlas once again recalled the moment he put a gun to Mike Tyson’s head. The interviewer asked, “What’s going through your mind when you pull a gun on Mike Tyson, that’s a scary thing to do?”

“You know what’s scarier? Having an 11-year-old girl, who had been approached by him, told by him what he was going to do to her, everything else,” Atlas replied. “Knowing that, and not doing something about that. And not stopping him. Knowing that I could do something. Knowing that the next time he might rape her. Or he probably will.”

“He told her what he was going to do to her, and she was 11-years-old,” Atlas said. “And he did it partly out of meanness. Evil, to a certain degree, that he wanted to get back at me because I put him out of the gym, and I was having that problem with Cus over the disciplining of him. And that’s the first time Cus and I was at ends, we were partners. He was doing that street thing, showing who has the power.”

“What was scary was me living with that not doing nothing about it. That’s scary. Not blowing his brains out, that wasn’t scary for me at that moment,” Atlas says. “I’m not proud of it at all. At all. At all.”

“God helped me to make sure it didn’t happen. And I’m grateful for that. I’m grateful for that, and I’m cognizant of what it could have been,” Teddy continued. “I’m cognizant that I wasn’t gonna go and hide because I didn’t want to face that because it was uncomfortable, it was scary. And it was scary. I was going to do something about it, and make sure that I did what I thought I had to do, protect my family at that time.”

“It was a stupid thing and maybe a selfish thing because my family would have suffered,” Atlas said. “But I was willing to suffer, I was willing to lose my life, whether through incarceration or whatever, to do what I thought had to be done at that moment.”

Tyson gave an interview on In Depth with Graham Bensinger from his Las Vegas home in 2010, where he gave his account of why Atlas pulled a gun on him and why their relationship deteriorated.

“It wasn’t necessarily because I flirted with his niece or touched her butt or something,” Tyson said. “Teddy wanted me to go back with him. Teddy was leaving Cus, and I wasn’t leaving Cus. He wanted me to come back with him. That’s really, basically what happened. I wasn’t leaving to go with him. Leave Cus and go to New York and train. Whatever the situation was. That’s what Teddy always wants to tell people. He wants people to think he is a tough guy, he’s a mafia guy.”

“He is supposed to be killing me with him and his mafia uncle since, I don’t know, since I was 16,” the former undisputed heavyweight champion said in the interview. “They were supposed to be getting me or doing something. I’m still here.”

Tyson said Cus D’Amato liked Mike more than Atlas, which caused Teddy to have a jealousy of him. “Cus liked me more than he liked him. He don’t like that. That’s just what it is.”

In 2011, Graham Bensinger told Business Insider that after he asked Tyson about the Teddy Atlas gun situation, the boxer shut down.

“We were told we had an hour, but that if things were going well, we could stay longer. I prepared 16 pages of questions. I asked him a question about his trainer [Teddy Atlas] holding a gun to his head when he was 15, and he was noticeably irritated by that,” Bensinger told the publication. “After that, everything I asked was, ‘I don’t know.’ The interview was over. He went out back by his pool, where his pigeons are. I was maybe on page 7 of my questions, and I thought, this is the debut episode of the second season. We could have done better, and it was my fault.”

“I said to his assistant, ‘do you think I could just go out back and thank him?’ I did, and that turned into a three-hour conversation — no cameras, just us getting to each other. Two hours in, he said, ‘let’s do another interview.'”

In the summer of 2013, Mike Tyson and Teddy Atlas put aside their differences and the gun incident to have a friendly reunion. After not talking to one another for two decades, the two men hugged it out.

Tyson said he approached Teddy because “life is short.” “I made amends with everybody. I owe it to my sobriety to make amends,” Tyson said.

Atlas told Fight Hype in 2013, “It wasn’t like Mike was coming there with FOX cameras and some of the other affiliations that he has going on. He came in as himself to say what he said, and at the end of the day, I recognized that and like I just said, I think we have accountability to be responsible for our actions and we also have the responsibility as human beings to look at somebody that made a mistake and consider where they are coming from and consider that they are human, and if they really mean what they say. And if they do, you know what?”

“I just listened to him, and for me, I was concentrating on observing in my mind where he was coming from and how sincere it was. And I thought it was sincere, and I just listened to the words, and the words were basically, ‘I was wrong, and I’m sorry.’ That’s it, and that’s all you can ask for,” Atlas said of the reconciliation.